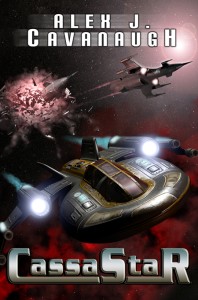 To pilot the fleet’s finest ship…

Few options remain for Byron. A talented but stubborn young man with a troubled past and rebellious attitude, his cockpit skills are his only hope. Slated to train as a Cosbolt fighter pilot, Byron is determined to prove his worth and begin a new life as he sets off for the moon base of Guaard.

Much to Byron’s chagrin the toughest instructor in the fleet takes notice of the young pilot. Haunted by a past tragedy, Bassa eventually sees through Byron’s tough exterior and insolence. When a secret talent is revealed during training, Bassa feels compelled to help Byron achieve his full potential.

As war brews on the edge of space, time is running short. Byron requires a navigator of exceptional quality to survive, and Bassa must make a decision that could well decide the fate of both men. Will their skills be enough as they embark on a mission that may stretch their abilities to the limit?

What Inspired You to Write Your Book?
This was a story I wrote as a teen, inspired by the 1970’s BattleStar Galactica, Star Wars, Buck Rogers, and Star Trek. I wrote so I could read the stories I couldn’t find anywhere else. This manuscript was stuffed away for thirty years before I pulled it out and decided the characters were good, but the story needed work. I completely rewrote the story and it became my first published novel.

How Did You Come up With Your Characters?
Byron and Bassa were inspired by the movies and shows I was watching at the time, such as Battlestar Galactica and Star Wars. I just pictured an older, wiser man guiding a young upstart with talent. From the original stories I wrote about them as a teen, those two characters were the only thing to survive the rewrite.

Book Sample
The only team to achieve a perfect score on their final simulator test, Byron and Trindel’s precision continued on Guaard. While he despised personal, individual scrutiny, Byron relished the opportunity to show off his skills in the cockpit. As the week progressed, his confidence grew. Basking in the glory, he believed his team’s abilities beyond question.
By the end of the first week, they emerged from the simulator triumphant. Not only had they completed another practice drill without error, but Byron believed he exhibited several complicated and daring moves in the process. Performing several jumps by way of the ship’s teleporter, he emerged at the precise location every time. All targets destroyed and they’d completed their task within the allotted time frame. In Byron’s mind, their run showed perfection.
Trindel removed his helmet, revealing curly locks now plastered to his head. “We’re good!” he said, flashing one of his broad grins.
Byron removed his own helmet and tossed back his head. Running fingers through his straight, black hair, he caused the strands to stick out in an unnatural pattern. Grinning at his navigator, Byron straightened his shoulders with pride.
“No, I’d say we’re perfect,” he said, holding up his fist.
Trindel returned his gesture and they tapped knuckles. As one, the young men walked toward the control room. Byron predicted another report of excellence on his team’s record.
Officers Rellen and Char monitored their flight today and awaited the men in the control room. It surprised Byron to discover Bassa also present. The young men snapped to attention, aware their casual posture would be viewed as unacceptable by the senior instructor. Bassa noted their entrance, his gaze once again returning to the series of monitors in the control room. Rellen and Char remained seated but leaned away from the main panel. Byron waited for one of the men to speak.
“Adequate run,” said Bassa, his gaze still averted.
Byron suppressed the indignation that arose in his thoughts. “Yes, sir,” he replied in unison with Trindel.
Officer Bassa straightened his shoulders, a frown on his face. He turned to face the young men, his hands clasped behind his back.
“You performed numerous jumps,” he said, meeting Byron’s eyes.
“I do what I feel is necessary to succeed, sir,” Byron said, ready to defend his decisions.
Bassa’s eyes narrowed. “A good pilot cannot rely solely on the teleporter. You must learn to master maneuvers.”
“Yes, sir,” said Byron, taking a quick breath. “We did perform twenty-seven unique maneuvers during that flight, sir.”
A flash of panic burst from Trindel but shielded before it travelled beyond Byron. Bassa’s eyebrows pulled together, reflecting his disapproval of the unsolicited statement. Realizing he’d spoken out of turn, annoyance rose in Byron’s thoughts. He didn’t want to incur the senior officer’s wrath but resented criticism of his skills. He’d flown perfectly today.
“Perhaps you’d prefer an opportunity to showcase those maneuvers,” Bassa said, his tone implying it was an order rather than an offer. “Officer Char, please run number 789 with the teleporter offline.”
“Yes, sir!”
Unable to respond, Byron stared in silence as Char punched in the code for the program. Bassa gestured for Byron and Trindel to return to the simulator, and they exited the control room with great reluctance.
Well, didn’t take you long to annoy Bassa, Trindel thought privately.
Always start at the top, Trindel…
Byron knew he’d been too quick with his boastful words. Upon reaching the simulator entrance, he paused and glanced up at the control room. Byron grasped his helmet and placed in on his head before nodding at Trindel.
Regardless, we’ll ace this run, he said, not bothering to shield his thought.