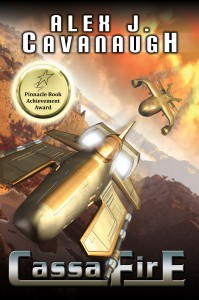 CassaStar was only the beginning…

The Vindicarn War is a distant memory and Byron’s days of piloting Cosbolt fighters are over. He has kept the promise he made to his fallen mentor and friend – to probe space on an exploration vessel. Shuttle work is dull, but it’s a free and solitary existence. The senior officer is content with his life aboard the Rennather.

The detection of alien ruins sends the exploration ship to the distant planet of Tgren. If their scientists can decipher the language, they can unlock the secrets of this device. Is it a key to the Tgren’s civilization or a weapon of unimaginable power? Tensions mount as their new allies are suspicious of the Cassan’s technology and strange mental abilities.

To complicate matters, the Tgrens are showing signs of mental powers themselves, the strongest of which belongs to a pilot named Athee, a woman whose skills rival Byron’s unique abilities. Forced to train her mind and further develop her flying aptitude, he finds his patience strained. Add a reluctant friendship with a young scientist, and he feels invaded on every level. All Byron wanted was his privacy…

What Inspired You to Write Your Book?
My fans! I never envisioned more than one book in this series. CassaStar was to be a standalone. But readers wanted to know what happened next to Byron, and they wanted a female character, so I wrote CassaFire for them.

How Did You Come up With Your Characters?
Byron was established in the first book, CassaStar. Athee came from a short story I’d written about Byron back when I was a teen. Since I knew both characters, it was easy to envision them and their relationship.

Book Sample
Aware he needed to assist Athee with her harness, Byron stepped away from the door. Unable to locate her, he frowned. The other two passengers were secure in their seats and gave no indication as to her whereabouts. Alarmed, Byron peered into the cockpit. Athee now sat in the co-pilot’s seat, her harness in place and eyes scanning the control panel. Concerned, he entered the cockpit. She looked up and smiled.
“Your controls still amaze me,” she said, her eyes reflecting childish wonder. “So much information to process.”
Hesitating, Byron grasped the back of her seat. “You’ve been in a shuttle before?”
“Of course. The previous shuttle pilot even gave me a ride over the valley.”
I bet he did! Byron thought, staring at the attractive young woman. “Well, you need to go take a seat with the other passengers.”
Athee tossed her hair aside and eyed him expectantly. “I thought I’d ride in the cockpit with you.”
“That’s probably not a good idea.”
“Why not?”
“That’s the co-pilot’s seat.”
“Do you have a co-pilot?”
“Well, no…”
“Then this seat is open.”