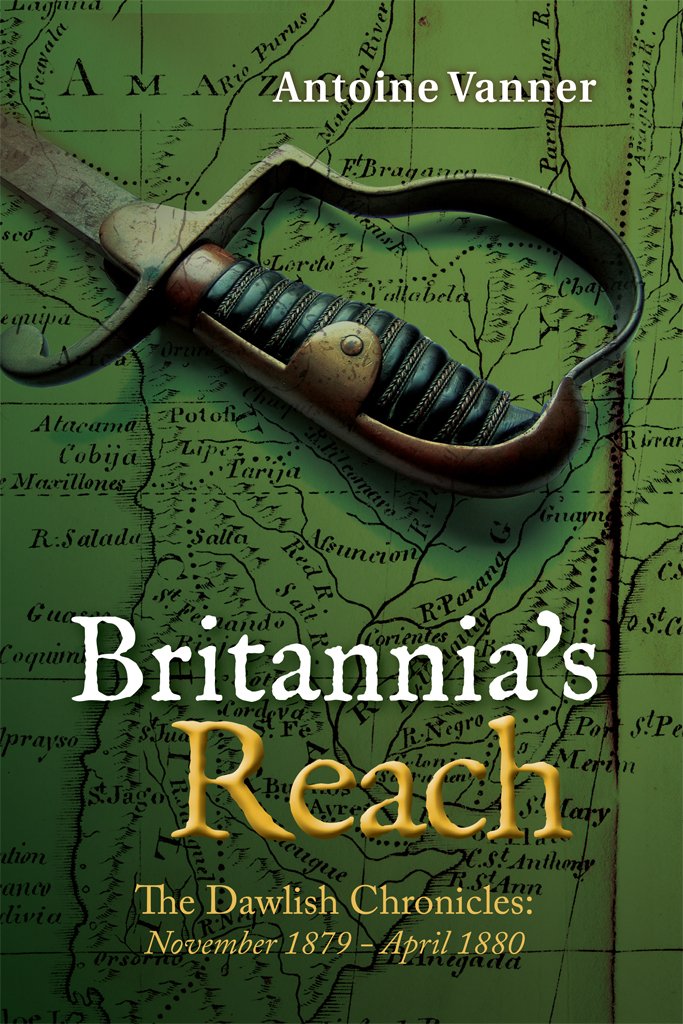 1880. On a broad river deep in the heart of South America, a flotilla of paddle steamers thrashes slowly upstream. Laden with troops, horses and artillery, intent on conquest and revenge.

Ahead lies a commercial empire that was wrested from a British consortium in a bloody revolution. Now the investors are determined to recoup their losses and are funding a vicious war to do so.

Nicholas Dawlish, an ambitious British naval officer, is playing a leading role in the expedition. But as brutal land and river battles mark its progress upriver, and as both sides inflict and endure ever greater suffering, stalemate threatens.
And Dawlish finds himself forced to make a terrible ethical choice if he is to return to Britain with some shreds of integrity remaining…

Britannia’s Reach continues the story of Nicholas Dawlish, first introduced in Britannia’s Wolf. The Royal Navy he joined as a boy, when it was still commanded by veterans of Trafalgar, is in feverish technical transition, and there are opportunities aplenty for the daring and the innovative. But is the price of advancement too high?

This is the second book in the Dawlish Chronicles series (the first is “Britannia’s Wolf”) and the third is due to be published late in 2014.

What Inspired You to Write Your Book?
The Dawlish Chronicles reflect my life-long interest in the naval and political history of the second half of the 19th Century. The period was one that saw the advent of a huge range of new technologies, great social change, unprecedented economic growth and massive shifts in political power balances. There were many minor wars in remote locations but few really big ones and nobody guessed that the world was sliding towards disaster in 1914.

I wanted to write naval historical fiction set in this period, breaking new ground since most of the work published in this genre, is set in the 1775-1815 “Age of Fighting Sail” period. I’ve chosen instead to move on to a period when steam power and other new technologies were transforming warfare afloat. I’ve built my books around the adventurous life of Nicholas Dawlish, a British naval officer who was born in 1845 and who died 1918. In my first book, Britannia’s Wolf, we met Dawlish in Turkey in 1877/78 and the second, Britannia’s Reach finds him in Paraguay in 1879/80. In both books he faces not only desperate armed conflict but daunting moral dilemmas. In both books I’m setting the action in locales where my own adventurous life has brought me and using actual historic events as background..

These books have been well received and I’ve been described as “The Tom Clancy of Historical Naval Fiction” by the maritime novelist and historian Joan Druett. I’m obviously flattered by the comparison!

How Did You Come up With Your Characters?
I guess the journey started long before I started hitting the keys. I’ve always been fascinated not just by 19th Century history but by what was the cutting-edge technology of the time and how it impacted on social, economic and political developments. I’ve always had a particular interest in matters nautical and naval power was a key consideration in that period. I’ve been lucky to have lived in eight countries long-term, so that I’ve been exposed to history “on the ground” – this can give a much different perspective on events. I always wanted to write and the idea of a character whose life spanned the late 19th and early 20th Centuries, and who was both actively and passively exposed to the changes, was a natural one. The starting point for the series was to block out a birth-to-death timeline for my character, Nicholas Dawlish, and to synchronize his possible adventures with actual historical events. Plotting followed – that can be painful, but great fun too – and then it became a matter of writing, and rewriting, and rewriting yet again.

About the Author:
Antoine Vanner previously spent many years in the international oil industry and also traveled extensively on a private basis. He survived military coups, guerrilla warfare, a militia attack, storms at sea and life in mangrove swamps, tropical forest, offshore platforms and the boardroom. He is fascinated by 19th Century history and is very familiar with its technical, political ans social changes. “The entire Victorian era is interesting because for my generation it’s ‘the day before yesterday’ so to speak,” Vanner says. “It’s history that you can almost touch and I want to bring it alive in my novels.”