You are here: Home / Fiction / Fantasy / Bought by Charissa Dufour 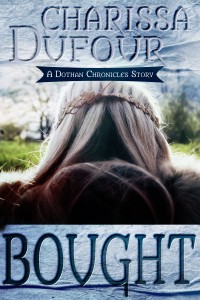 *This is a completed series*
Had Princess Bethany known by the end of the day she would be a slave, traveling into her enemy’s territory, she might not have gotten out of bed. Bethany had been raised as the youngest daughter of the last king to stand against King Wolfric’s raging armies, but now she finds herself with a rope wound around her neck, marching into Wolfric’s territory, with no concept of what might lay ahead of her.
Meanwhile, Wolfric’s pet knight, Sir Erin Caldry, journeys into the mountains to discovery the results of an unplanned attack on the enemy princess’ caravan.
Who will buy a slave like Bethany, without any notion of hard work? What will Sir Caldry find in the mountains? Will the two ever meet?

Book Sample
Bethany stared down at her ruined slippers. They had been soft doe hide, perfect for dancing or a relaxed day during the summer. Now they were so wet she could barely keep them on her aching feet.
Her dress hadn’t fared much better.
The rich green fabric had turned a dull brackish brown color after her recent plunge into the icy river and the subsequent crawl through the mud. The wet folds of the skirting clung to her legs until every curve showed. Bethany felt fresh tears roll down her face and drip off her chin. Every inch of her body ached.
As a princess, she had never been forced to walk farther than the castle bailey, but that life had ended with the attack on her caravan.
Bethany’s mind broiled with righteous indignation. How dare they attack my caravan? How dare these vagabonds take me prisoner! And how dare my father send me so near King Wolfric’s land in the middle of a war? It is all his fault.
In Bethany’s short life, she had never before experience true hatred toward any member of her family. She had been angry with her parents for taking away a toy or keeping a master on when she had tired of the subject, but that was a far cry from the rage building up in her chest.
Her father had sent her to Garrul to “lighten the heart of her uncle” or rather to entertain the old, gouty soldier. Bethany hadn’t wanted to go. She had even thrown a fit, inappropriate for any twenty-year old, but common enough for her. Though it usually worked, it had done nothing to sway her father, and her mother did as her father bid.
If it hadn’t been for them, I’d be safe at home, rather than trekking through the woods of this forsaken country.
Bethany shifted her hands, trying to ease the pressure on her wrists. The ropes were too tight!
The princess glanced up from her feet to look around at the men walking alongside the long row of captured individuals. Something about them told her they were not part of the group that had attacked her caravan. They had just been at the right place to pick her up after her headlong run through the woods.
When the attack began, her lady-in-waiting had sent her through the trap door of their wagon and into the woods, to wait until the attackers had been killed. Somewhere out there, her people were looking for her.
A dusting of hope brushed across her senses. They were looking for her! It was only a matter of time before they found these slavers and freed her.
“What’r you smilin’ ‘bout?” demanded one of the men before pounding her on the back of the head with the hilt of his sword.
Bethany’s vision blurred as she slumped to her knees, the rope tied around each of the slave’s necks cutting into her flesh. The princess blinked a few times before her eyesight cleared.
“Choow…” she began, trying to say “how dare you,” though the only sound to escape was a gagged choke.
The slaver hauled her to her feet and pushed the whole group forward.
Bethany opened her mouth to try again before clamping it shut. They didn’t know she was a princess, and she needed to keep it that way. Besides, every time she tried to talk, she risked spitting out the signet ring hidden in her mouth.
The princess clamped her mouth shut and stared fixedly at the back of the man in front her. All she had to do was put one foot in front of the other. Her soldiers would finish off that mob of vagrants who had attacked her caravan, and then they would come in search of her. Another hour, maybe two, and she would be safe, and warm, and happy all over again.
Then will I have a word or two to share with my parents!