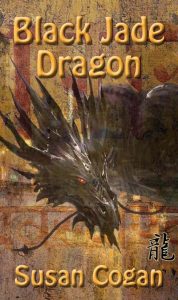 In the South China Sea is an island protected by nine dragons. Angie Tanaka has made one of them really, really angry.

Angie is running from the Hong Kong police and pays the captain of a fishing boat to take her … anywhere but here. Her only possessions are her grandfather’s sword and a fistful of stolen diamonds. When she lands on Shaolong Island she thinks she’s made good her escape with her ill-gotten gains. She thinks she’s safe. She’s heard about Shaolong’s dragons but she thinks they are a myth. She doesn’t know they can take human form. She doesn’t know that on Shaolong anyone you talk to might be a dragon.

When Angie sees a mystical pearl the size of her head she finds it irresistible. True to her nature, she must steal it. And true to her usual bad luck, in the middle of the heist a kindly old woman is murdered. Angie is not a killer, but the murder was done with her sword, she was there, and she was stealing something. All eyes turn to Angie, especially those of the dead woman’s husband who looked like such a nice old man … until he turned into the Silver Dragon.

Now Angie is running for her life and the only thing standing between Angie and a monster that could eat a Toyota Tundra in two bites is Daiyu, the Black Jade Dragon.

What Inspired You to Write Your Book?
One day during a writing stint I was sitting on the couch slogging my way through a noir mystery (I finished it and it’s not half bad, but I’m not a noir person). I looked over and someone had left a teeshirt catalog open on the cushion beside me. It advertised a teeshirt that said “Do not meddle in the affairs of dragons for you are crunchy and good with ketchup.” I thought “My next book is going to be about dragons.”

How Did You Come up With Your Characters?
I think Angie Tanaka has always been inside me. She’s what I think about when I’m being polite but thinking rude and sarcastic thoughts. There was a big gap between the 3rd and 4th volumes of her series and I spent a few minutes worried that I’d lost her voice. But, nope, there she was patting her foot, waiting for me to get on with her next adventure. I have friends who can’t read these books because they can only hear me talking in Angie’s voice and … she’s not very nice. I, of course, am a TERRIBLY nice person. Really. And Daiyu, the dragon? She’s epic and legendary and a little scary. I wish I knew her. I wish she was real. I would love to think there is someone out there who is like her.

Book Sample
My name is Angela Rosarita Tanaka, but you will call me Angie if you know what’s good for you.

I needed to get out of Hong Kong. To say Hong Kong cops are humorless bastards would be, well, something that’s so obvious that it would be silly to say it. Even if I just said it.

Getting through the waterfront market had been relatively easy, negotiating the narrow paths that wound through stalls crammed with every imaginable thing from barbecued cat-on-a-stick to Rolexes that were absolutely genuine, I’m sure. I needed a fishing boat. Not that I was going fishing, mind you, but I needed a boat that looked nice and sturdy and yet shabby enough not to be fussy about passengers. My heart did a happy dance when I saw exactly what I needed. Without running—running attracts attention—I went up to the captain and introduced myself.

I happen to know if you give a man who owns the right kind of fishing boat a big enough wad of cash, he will not ask why you are giving him so much. He will pocket the fistful of bank notes and say the Chinese equivalent of “Where to, Ma’am?” In my case, “where to” was anywhere but here. I answered his question by waving vaguely to the north east. He nodded gravely. He was short—shorter than I am by about four inches—and built like a Chinese brick outhouse and he was burned dark by the sun. He could have been anywhere between forty years old and a hundred and twenty.

The boat captain gasped and focused his attention behind me. I glanced back and saw three of those famously humorless Hong Kong cops pile out of a white patrol car and begin terrifying the citizens by stopping them and asking them questions. I had no doubt the questions were along the lines of “Have you seen an American woman with red hair?” Right now the citizens were shaking their heads. Even though I had a cap pulled over my hair, I figured eventually one of them would nod and point in my direction.

The captain noticed the cops too. He wasn’t born yesterday. Without another word he picked up my duffel bag and tossed it onto the boat’s well-scrubbed deck. I climbed on board and in a few minutes the ancient gas engine had us chugging through the harbor in an easterly direction. By east he knew I didn’t mean Shenzhen or Shantau. By the comforting wad of cash in his pocket he knew I meant anywhere but communist China.