You are here: Home / Bargains and Freebies / Bargain Books Under $3 / Beyond the Hidden Sky by Marcha Fox @startrailsIV

Choices, even seemingly small, insignificant ones, can have tremendous consequences as each character discovers in this fast-moving space adventure. Teenage siblings Dirck and Creena Brightstar have never gotten along, even in the best of conditions, so being confined in a cramped starship cabin as the family emigrates to another planet inevitably results in an explosive argument. Desperate for some time alone, Creena explores the ship’s labyrinth of passageways hoping to find someplace to escape from everyone. She succeeds, but getting fired off in an escape pod was a bit more than she bargained for. With no support from starship authorities to help in the recovery, her father has no choice but to find her himself. Space travel, however, is never simple. Time passes at different rates based on velocity, complicating their separation with not only the vastness of intergalactic space but time as well, triggering a series of events that will change everyone’s life forever. But was it really an accident or what her father’s power-hungry nemesis, Augustus Troy, planned all along? “Beyond the Hidden Sky” launches the Star Trails Tetralogy, a science fiction family saga that continues in “A Dark of Endless Days.” 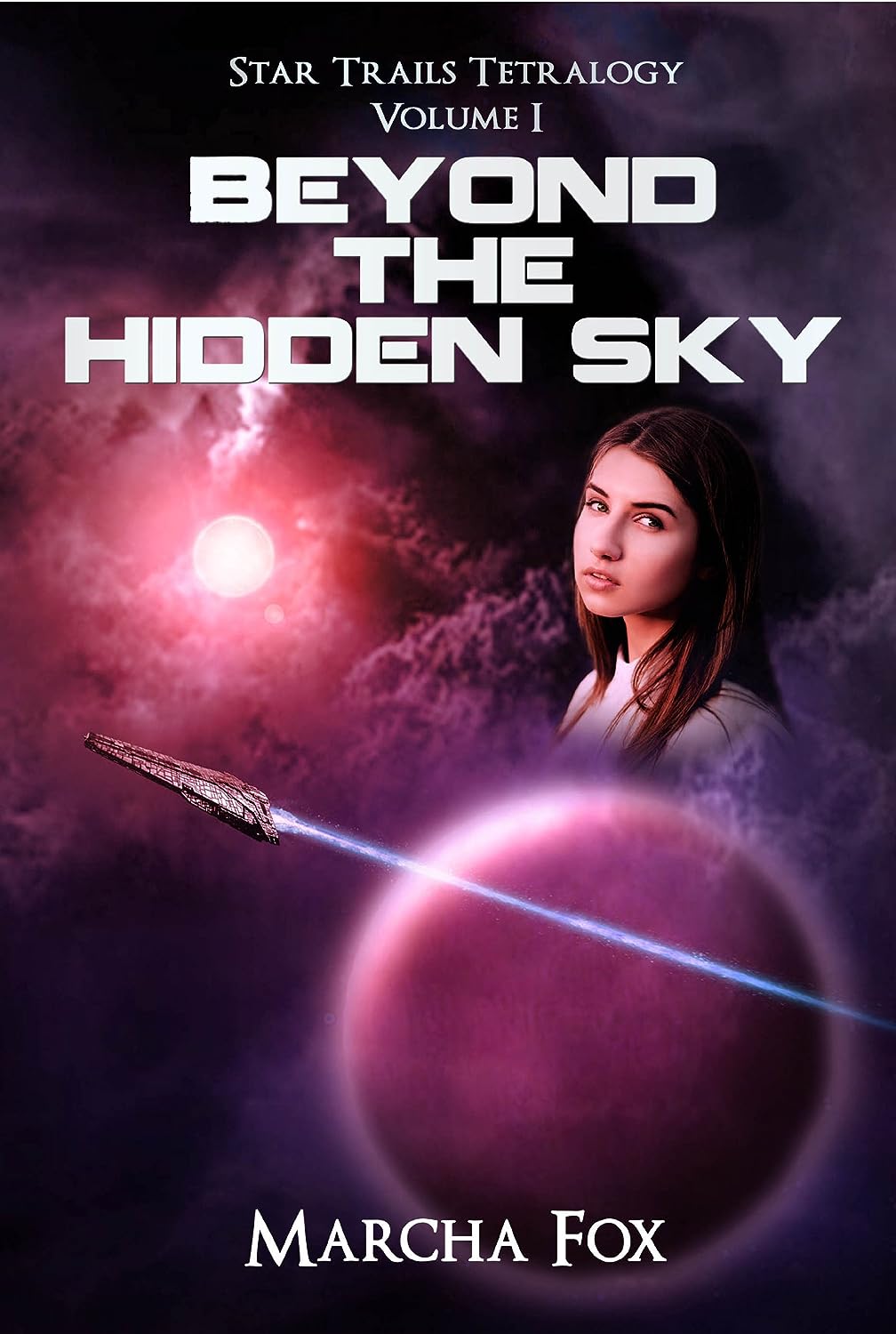 How is Writing In Your Genre Different from Others?
Science fiction is what inspired me to eventually pursue a bachelor’s degree in physics and I hope that my books can do the same for today’s youth. I believe the science in a story should be credible as well as accurate so that the reader learns something painlessly along the way. Thus, the authors need to have an understanding of scientific principals, which can actually increase the complexity of the plot and make it more credible. The primary difference between science fiction and fantasy is that SF will involve technology of some form and provide an explanation for it. If it doesn’t but simply uses a science fiction premise for the story then it’s my impression the author didn’t do his or her homework and it’s really not true SF.

I had a lot of fun developing Cyraria, the planet where the majority of Star Trails takes place. Without my knowledge of astronomy and physics I couldn’t have done so in a believable way and it definitely added to the story. I even dedicated it “To the muses whose relentless promptings brought this story to life and the physics professors whose instruction allowed me to do the necessary math.”

In today’s world of quantum physics where there are still so many unanswered questions SF writers have a lot of speculative material with which to work. I disapprove of so many Hollywood movies that essentially violate the laws of physics when in most cases an accurate representation would actually be more dramatic.

What Advice Would You Give Aspiring Writers?
Be patient with yourself. Everyone has to start somewhere and your style and abilities will evolve the more you write. If you get discouraged just tell yourself that at some point even best-selling authors were where you are now. Reading well-written books including best-sellers is important, too, to understand what people expect. It’s particularly helpful to read the work of those who write better than you do so you can learn from their style and technique. Sometimes it may be discouraging and you may think you could never write that well but if you keep at it you’ll develop your own style that could be just as good. Keeping a notebook of clever phrases, metaphors and descriptions is helpful as well. Networking with other writers is helpful as well either locally or through social media.

The main thing is to keep writing. It’s hard to make a living writing books these days but you can always get a job that requires writing in the meantime. There were numerous times that I got a job because I could write regardless of what the job description actually was. I’ve written for newspapers, done more newsletters than I can even remember, worked as a NASA technical writer, and an aerospace proposal writer which all taught me something about putting words down to communicate. Having a career is always helpful for character development as well. They say “write what you know” which is excellent advice. If you’re familiar with a line of work you have less research to do to be authentic when one of your characters is thus employed. For example, if you’re going to write murder mysteries you should have a good grasp of police procedures or if you write war stories you need to understand military protocol.

What Inspired You to Write Your Book?
I’ve loved science fiction since I discovered the genre as a child and have always been a writer at heart so it made sense that the two would eventually combine. I suppose the initial inspiration for this book came from the movie “Star Wars” and the idea of being jettisoned in an escape pod. By running it through the “what if” premise formula it became “What if a frustrated teenage girl got jettisoned in an escape pod while her family was emigrating to another planet?” At first I saw it as a children’s picture book entitled “Wish Upon a Starship” but it quickly evolved into not only a full-length novel but the first one in what would become a series.

About the Author:
Marcha Fox has loved science fiction since she was a child with the stars always holding a strong sense of mystery and fascination. Her love of astronomy resulted in a bachelor of science degree in physics from Utah State University followed by a 21 year career at NASA where she held a variety of positions including technical writer, engineer and eventually manager. Her NASA experience was primarily at Johnson Space Center in Houston, Texas but included trips to Cape Canaveral in Florida, visiting other Centers in Mississippi, Alabama and Maryland as well as visits to the European Space Agency in The Netherlands. Her most memorable experience, however, was the sad task of helping to recover space shuttle debris in East Texas following the tragic Columbia accident in 2003. “NASA was a great career experience, but writing is what I’ve always wanted to do. To me there is nothing more exhilarating than bringing a character to life.”

Would the truth be known, her first love has always been writing and her primary motivation in obtaining a physics degree was to produce more accurate science fiction. While working at NASA she remembers going to see the movie “Armageddon” with a friend who was in the oil business. Afterwards the two proceeded to rip the movie apart for its inaccurate representation of both industries. “My daughter told us to lighten up, that it was only a movie, but I was upset because of all the people, especially teenagers, who would think what they were seeing was correct when it wasn’t. It doesn’t seem as if it would take that much more to get it right so that entertainment is also informative, not something that may have to be unlearned later.”

She has made it a point to “do the math” regarding various elements in her books to assure accuracy and hoping to instill an interest in science and engineering to her readers in an enjoyable and entertaining way. She admits that Cyraria’s figure-8 orbit around a binary star system is a bit of a stretch but maintains it’s mathematically feasible even though it would be unstable with life on such a planet beyond challenging with its seasonal extremes. “But that’s what makes it a good setting for the story,” she adds.

It’s difficult for her to identify her favorite character but admits she leans toward Win Sendori, who appears in Volume II. “He’s a gutsy, honest, action-oriented person who has no qualms pursuing the right thing to do, regardless of the consequences. He just showed up as what I thought would be a minor character then worked his way into the story and became an integral part of the plot.”

Born in Peekskill, New York she has lived in California, Utah and Texas in the course of raising her family, which included fifteen years as a stay-at-home mom before returning to college in her 30s to obtain her degree, a feat accomplished while she still had six children at home. All are now grown with children of their own providing her with 17 grandchildren and two great-grandchildren so far. Never at a loss for something to do besides writing she enjoys gardening, her two Bengal cats and keeping up with her family.

She hopes to have the fourth volume of the Star Trails series completed in 2014 but can’t say for certain whether or not it will be the last. “These characters have a life of their own and may move on to other adventures.”