You are here: Home / Fiction / Mystery/Suspense / Beyond All Recognition by Kennetheade 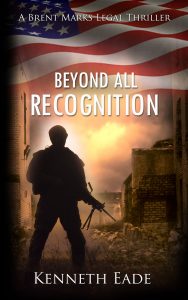 During his fourth tour in Iraq, 26-year-old Captain Ryan Bennington, like many soldiers of his time, was fighting a faceless enemy, where a split-second decision meant the difference between killing an innocent civilian or losing an entire platoon to a suicide bomber. Ryan survives the war and comes home to conquer PTSD and chronic unemployment, only to be arrested for following the orders of his Commander to kill suspected Al-Qaeda terrorists in a small Iraqi village, who turn out, after the fact, to be civilians.

Lawyer Brent Marks takes on Ryan’s defense in his court-martial trial, which will call upon the deepest, darkest secrets of the military industrial complex on trial. In their search for a scapegoat, have the powers-that-be gone too far this time?

What Inspired You to Write Your Book?
One of my readers who was a career military soldier inspired me to write this book. He told me his stories, his points of view, and was one of the beta readers who helped me make the battle scenes as realistic as possible.

How Did You Come up With Your Characters?
The protagonist, lawyer Brent Marks, is a key character in my Brent Marks Legal Thriller Series. The other characters are composites developed from real personalities.

Book Sample
“You get numb to it. That’s all I can say. Numb to death, killing. You get numb to the things that happen in war, but you can never forget them. They come back in your dreams after you finally get back home and they never leave.”
Slap!
Pull!
Observe!
Release!
Tap!
Squeeze!
“’SPORTS’ – It’s called the immediate action drill. Helps remind you what to do if your rifle malfunctions. It’s drilled into your head in training. You’re breaking that rifle down and putting it together two hundred times a day and by the time you get over there, you’re doing it like a machine on autopilot. All the war planning in the world goes out the window when the first shot’s fired in combat. That adrenalin kicks in, lights you up like a firebomb. But you remember SPORTS because it comes to you automatically, and that rifle’s the most important possession you’ve got. You’re only alive as long as it’s in your hands.”
Never surrender as long as there’s a means to resist. And never leave any man behind.
“General Smedley Butler said: ‘War is a racket. It is possibly the oldest, easily the most profitable, surely the most vicious. It’s the only one in which the profits are reckoned in dollars and the losses in lives.’ Well, I know war. Probably better than I know anything. You see in the movies all their charts and maps and plans. But when you hit the ground it’s pure fucking chaos. The loud thumping of mortar rounds, helicopters buzzing around, rockets exploding, the rat-a-tat-tat of gunfire. Guys getting hit. People screaming, calling out, ‘Medic! Medic!.’ Pieces of flaming hot metal flying. Sweating like shit under all that gear, the fucking smoke. The blood, the flies, the bodies swelling up in the killing heat, the smell.”
“Get small in your foxholes! Air support on the way!”
“They tell us we don’t have to obey any order that’s illegal. Then they tell us if we don’t obey it, we’ll go to jail. Orders come down from the Colonel and I’ve got to give them to my company. A hundred or more lives under my charge. What I do on a daily basis decides whether they live or die.”
You have to distinguish between the civilians and parties to the conflict at all times. But, make a mistake and you’ve either killed innocents or you get a whole patrol barraged by rocket propelled grenades and machine gunfire.
“Rules of engagement say you can use deadly force to protect your life. I’ve had to make split-second decisions on who to shoot and who not to shoot. We all have. Some guys have lit up people carrying bags of groceries heading toward them because they thought that they were insurgents coming to blow them up.”
Better to be judged by 12 than carried by six.

Buy Beyond All Recognition On Amazon