You are here: Home / Bargains and Freebies / Bargain Books Under $3 / Ariel: Nano Wolves 1 by Donna McDonald 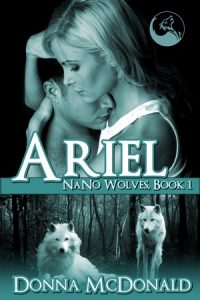 Being a living experiment wasn’t part of the scientific career she’d planned for herself.

Despite her sharp scientific mind and her degree in bio-molecular genetics, Dr. Ariel Jones hasn’t figured out how her life changed so much in a single day. Before she can blink and ask about what is going on, she is injected with a billion nanos and some very potent wolf blood.

Now she can suddenly turn into a giant white wolf with the bloodlust of a starving animal. And she’s an alpha…or so she is told by the even larger, very male, black wolf who was used to create her. Hallucination? She wishes. Whether human or wolf, Reed talks in her head and tells her how to handle things…or rather how to kill them…starting with the men who hold them all captive. Too bad he can’t tell her how to put her life back like it was.

Admittedly, there are perks to being a werewolf, such as meeting sexy werewolf guys like Matthew Gray Wolf. Science labs aren’t overrun with sexy men in white coats. She also doesn’t mind learning about a side of herself she never knew existed. It’s great changing into a real wolf whenever she wants, but being a living experiment wasn’t part of the scientific career she’d planned for herself. Neither was falling for the local werewolf alpha, but what else is a newbie werewolf caught in her burning time going to do?

What Inspired You to Write Your Book?
I wanted to bridge my love of Science Fiction romance with Paranormal. The idea of scientifically created werewolves intrigued me. The research for this book involved subjects like nano technology and the life of real Alaskan wolves. It was the first time I pinned my research to a board in my Pinterest account which I have now done many times because it is very nice to have all that data there visually. All in all this book was a lot of fun to plan and write.

How Did You Come up With Your Characters?
I'm a Science Geek who majored in English because she loved reading and writing. I wanted my lead character–my scientifically created alpha–to feel a similar struggle. The beta is a federal agent and she sort of has the opposite problem. She has to now answer to someone that her every cell sees as her superior. The third character is just a woman who was in the wrong place at the wrong time, but this kind of character is often a "sleeper" with the most to deal with when she has to face what has happened.

Book Sample
The black wolf on the table was still and unmoving. Ariel swallowed hard. She couldn’t let Reed die. She just couldn’t. His blood had created her. Perhaps her blood could save him. It seemed a viable risk to take given all they’d suffered together at Crane’s hands. She didn’t want to deal with this nightmare alone. She needed the creature on the table to help her survive what had happened to her.

She looked at the medic, a native woman with a kind face. “Can you hook up a direct transfusion? I’m one of Reed’s…family members…and his alpha in training. My blood stands the best chance of helping him.”

“He has lost more than we can take from you, Alpha,” the healer said softly.

Ariel shook her head. “Doesn’t matter. I have to try. Take what you safely can. My blood is special. I should build it back quickly and it should build quickly in him. After you’re done though, you will not be allowed to take my blood or Reed’s again. You’re better off not knowing why.”

Ariel turned her sincerest gaze to Matt. “If you trust me at all, see that the transfusion equipment is destroyed after we do this. Incinerate them completely if you can. I’m telling you this in case anything happens to me.”

“What could possibly happen to you?” Matt demanded.

Ariel shrugged. “I don’t have any idea about the long term effects of what was done to Reed, me, or the other women. My wolf turning was not natural. There’s no time to go into the whole story, but what I’ve become is the result of a science experiment. Now do as I say and protect your pack, Matt. I don’t want to die knowing I’ve harmed you or anyone connected to you.”

Ariel watched the native woman walk around Reed’s bed and stop in front of her. “I see the Great Alpha’s life in your determined eyes, which look so much like his. I will do as you ask. There is no need to charge Matt with watching me. My brother knows my word is good.”

“We have different mothers, but similar hearts,” the healer said.

Ariel sighed. “Okay. Let’s do this then.” She turned to Matt. “It’s too cold to sit without clothes. Can you split this sleeve for me? I’d do it myself, but it’s too awkward a reach, and I don’t want to get naked.”

Matt waited until Ariel had climbed up onto the gurney Eva had wheeled close to Reed’s bed. “Eva, shouldn’t Ariel shift to her wolf to make her stronger?”

Eva studied the floor for long moments. Finally, she shook her head. “No. Something valuable will be lost if she shifts. We will try the transfusion with her in human form.”

Matt stepped to the side and ripped the sleeve of the coveralls up to her shoulder. He flinched when Ariel saw the size of needle Eva brought to insert into her arm. She looked away while it was being done.

“Damn. That was worse than the injections I got just before I was turned,” Ariel said. “I’m going to hate needles for the rest of my life now.”

Matt grabbed her free hand. “Me too. Try thinking of something you like. That always helps me. Maybe you could think of a nice hot fire and how much fun it would be for us to put it out.”

Ariel’s snicker made him feel marginally less helpless in the face of her pain.

Eva opened Ariel’s fingers and put a hand pump into them. “Squeeze this to get it going. The pump will take over after the blood begins to flow.”

Matt saw Ariel’s jaw harden in determination as she did what Eva told her to do. He tightened his grip. “You are one of the most unselfish, determined people I’ve ever met.”

Ariel snorted, her fingers squeezing the pump. “Now I know why all those women are chasing you. You’re just an incredibly nice guy in werewolf’s clothing.”

Matt gripped her hand tighter. “That was a terrible joke. And I am not always nice. You just bring out the nice in me.”

“Well, we are friends-with-benefits now,” Ariel joked, hearing the pump finally kick in and take over. “Listen Matt. Seriously. If anything happens to me, take care of Brandi and Heidi. Okay?”

Matt nodded. “I will, but nothing is going to happen to you, Ariel. I’m the alpha of this pack. I forbid it.”

“Crazy Crane—the guy who did this to me—was an evil SOB. Anything is possible. And last time I checked, you weren’t God, though you did make me see heaven today,” Ariel said, feeling herself getting sleepy.

From far away, she heard Matt calling her name, but sleep beckoned too strongly.

For joining the author’s email/newsletter list you will get:
Free Book (title changes every few months)