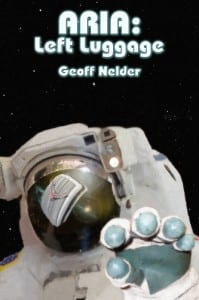 Today, Jack caught a bug at work. He catches a bus home. By the time he disembarks in the desert town of Rosamond, all the other passengers and the driver have fuzzy heads. Jack had caught an amnesia bug, and it’s infectious. Imagine the ramifications: The passengers arrive home infecting family; some shop en route infecting everyone they meet. The bus driver receives more passengers giving them change for last week’s prices and today’s amnesia. Some passengers just started work at the power plant, the water treatment works, the hospital, fire station. All to shut in weeks. Ryder, in the UK, realizes what’s going on but can he persuade friends to barricade themselves in a secluded valley, hiding from the amnesia bug?

A silvery case is found in the external struts of the International Space Station (ISS). It is opened on Earth releasing a virus that causes retrograde amnesia at the rate of a year’s memory per week. No one is immune. It is tragic – as after a week or so people forget where their new homes and jobs are, and children lose speech, medicines are not produced. Yet there is humour – who is that you wake up next to, and did you both make out? Ryder realizes what’s going on in time to persuade a handful of professionals to barricade themselves in a remote Welsh valley- Anafon near Aber Falls. The uninfected crew of the ISS join them. Can they survive intruders? This is a human disaster yet with romance, betrayal, survival, mystery and an exploration into what is so important in life it must be preserved.
ARIA: Left Luggage was voted the best SF novel of 2012 at the P&E Readers’ Poll for its original concept & dynamic characters.

How is Writing In Your Genre Different from Others?
Although ARIA is science fiction there are no aliens – at least in Left Luggage, and no space opera fire fights. Although Jena is a feisty strong female astronaut, and Dr Antonio becomes as mad as they come, the main characters are ordinary people to whom extraordinary things happen. This in itself and their need to survive apocalyptic events, changes them to be strong, passionate and cunning.
I have original ideas in ARIA. Not the least being hte concept of infectious amnesia. No one has used this idea before.

What Advice Would You Give Aspiring Writers?
Join a writing group either in your region or online. I found Orbiters to be invaluable but you have to belong to the British Science Fiction Association to join that.

Author Bio:
Geoff Nelder has a wife, two grown-up kids, an increasing number of grandkids, and lives in rural England within an easy cycle ride of the Welsh mountains. He taught Geography and Information Technology for years until writing took over his life. Geoff is a competition short-fiction judge, and a freelance editor.

What Inspired You to Write Your Book?
As I puffed, riding my bicycle up a steep Welsh hill 5 years ago I had an original idea. What if amnesia was infectious? Then what if no one was immune. I researched like crazy for 4 months to discover a) there was no known medical event of infectious amnesia, and b) that the concept – especially with retrograde amnesia (lose say a year’s worth per day backwards) – hadn’t been used in published stories, nor on TV or film. It took a year to create the first 100k draft. I showed and discussed it with SF luminaries such as Jon C Grimwood, Charles Stross and US writer, Brad Linaweaver, who all endorsed it. Also to pal, Allan Guthrie, who is an agent, editor and author of hard-nosed crime. He wanted me to rewrite and tighten like crazy. So I did, and here it is.