You are here: Home / Fiction / Fantasy / Alone by Charissa Dufour 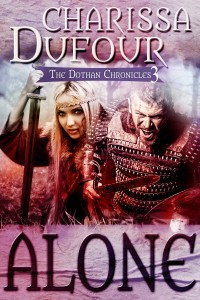 *This is a completed series*
King Wolfric is at a loss. His secret weapon has fled, and reunited with her family, and his eldest son is pining for his lost love. If he doesn’t act soon, his entire nation will begin to work against him. He must plan the final, and ultimate attack on the Dothans.
Princess Bethany Kavadh, youngest daughter to Wolfric’s enemy, is no longer within his grasp. After more than a year away from home—living as a slave and fighting her way back to freedom—Princess Bethany is finally home. The only thing is, she is no longer content with home life.
It’s not that her home has changed, but that she has changed.
As Bethany settles into home life again, a sickness descends upon her family and her betrothal to a nearby lord is announced. She and her brother, the king, disagree on everything from care for the sick to the duties of a princess.
Princess Bethany Kavadh will have to act fast to save her nation from the illness and Wolfric alike. The only thing is, she cannot do it Alone.