You are here: Home / Fiction / Science Fiction / Across Time by Jeff Fuell 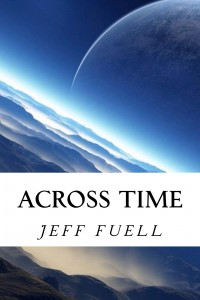 A time travel story that will stay with you forever… True love and friendship has no boundaries, even across time. Christopher and Susan are two teens who are best friends – one a talented guitarist with dreams of attending Julliard and the other a talented young writer who accidentally travel back to the year 1963. There they fall deeply in love and have to make a decision; do they stay with those they love and care about or return home while they still have a chance? But if only one of them returns, how will that change the timeline? Will their entire lives be changed for the better or for the worse? Will their dreams still come true? And will they meet up together later in time? From the author: Books come about in different ways. For this book the first thing that came to mind was the ending – two teenagers go on a time travel adventure and only one of them returns to their own time and they meet up again, one of them now obviously decades older. That was it. A week later the rest of the idea popped into my head one day out of the blue and I had my story. I knew who these characters were, what their goals were, everything. One of my favorite movies is “Somewhere in Time,” which is another time travel story. I wanted to try and capture the magic and emotion of that movie in this book. Hopefully, I have succeeded.

What Inspired You to Write Your Book?
The first thing that came to mind was the ending – two teenagers go on an adventure back in time. Once the opportunity comes to return home only one does. The characters meet again, one of them now decades older than the other. The rest of the story did not come to me for about a week. One it did I was off and running on a moving and emotional book that I am very proud of.

How Did You Come up With Your Characters?
Some of the characters involved in the book are real, such as Marie Osmond and guitarist Ritchie Blackmore. The others are a product of my imagination, although I share a good deal of similarities with the main male character.

Book Sample
“Excuse me, sir. This may sound like an odd question but… who is the president right now?”
“I’m sorry?” the man asked as he regarded the boy in front of him. “The president of what?”
“Of the United States.”
“Young man, are you serious? You don’t know? What are they you teaching you in school these days? Or, I guess I should say, not teaching you?”
“Please sir, it’s very important.”
He sighed as he looked down at the boy in grave disappointment.
“Well, I suppose I should tell you since it’s pretty obvious nobody at your school has taken the time to do it. The president is Lyndon B. Johnson. Does that ring a bell?”
“Uh, yes it does, sir. Thank you.”
The man sighed again and walked off while shaking his head.
Susan looked at the man until he was gone and then back at Christopher.
“What did he say?” she said as if the man had just spoken in Japanese.
Christopher looked down at the ground for a moment and then at Susan.
“He said that the president was Lyndon B. Johnson,” he said softly.
“Who’s that? I thought the president was that Bush guy that everyone hates so much.”
“I think…that Lyndon Johnson was a guy who used to be president a long time ago.”
“Christopher…what are you talking about? What do you mean a long time ago?”
Christopher looked back at the stores and saw something that got his attention.
“Let’s go over there. I want to check something,” he said.
They made their way across the street and were soon standing in front of a newsstand. There was a stack of newspapers sitting on a shelf and Christopher picked one of them up and gazed at the front page.
“Oh, my God!” he exclaimed.
“What so interesting?” Susan said as she looked at the paper and saw nothing that she would consider worth more than her momentary attention.
Christopher pointed at the top right hand corner and Susan leaned in to read it.
The date was May 22, 1963.
Susan stared at it for a few moments without saying anything and then slowly looked back at Christopher.
“Is that real?” she said slowly.
“I think so,” Christopher replied as he looked at the surroundings again, this time putting a definite date with them and now knowing why everything seemed so old.
“It… it can’t be. It must be a misprint or something,” she said as she frantically looked through some other stacks of newspapers that were spread out on the shelf. Everything that she picked up said the same thing: May 22, 1963.
She started going through even more papers, throwing some of them on the ground as she tried to find one that said something different.
“Susan?”
She kept going through the piles, throwing papers to the left and to the right.
“Susan? Stop it,” Christopher said quietly.
No response, other than even more frantic searching.
“Susan, stop it!” Christopher yelled as he grabbed her upper arms so that he was looking directly as her.
“No! No! It has to be a trick or something! It can’t be happening!” she screamed.
“Susan! Stop it!” Christopher yelled as he looked around them. Some people had stopped what they were doing and were staring at them. “Look,” he said as he leaned in close to her and whispered, “I don’t know what’s going on, but throwing a fit and making a scene about it is not going to solve it, okay?”
She just stared at him, her eyes wide with fear.
“Susan? Okay?”
“O-okay,” she finally said.
“Good,” he replied as he released her. “I can’t have you falling apart on me. I’m going to need your help to find out what’s going on and how to get back home, do you understand?”
“Yes.”
“Good. Now, the first thing we have to do is figure out what happened and then… maybe we can find a way to reverse it, somehow, and get back home. Our home.”
Susan looked down at the ground in thought and then back up at Christopher.
“The Circle! That must be it!”
“That’s what I was thinking; it’s the only thing that makes sense. I can only assume that it was some kind of time warp machine or a hole in reality or something. Once we got too close to it, well, we must have triggered it and here we are.”