You are here: Home / Fiction / Action & Adventure / Across The Pond by Michael McCormick 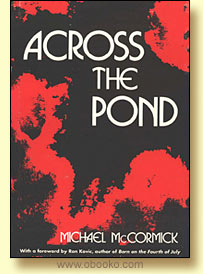 Across The Pond by Michael Mccormick is the story of a young American who fights in Vietnam for his country, only to be rejected when he comes home from the war. The author based the story on his experience as a U.S. Marine who served in combat. In the foreword for the book, Ron Kovic wrote, “This book with it’s deeply compelling narrative grips the reader from the beginning and does not let go. I believe it will be recognized as one of the important books to come out of the Vietnam war.”

What Inspired You to Write Your Book?
The Vietnam war.

How Did You Come up With Your Characters?
The characters are fictional representations of people I knew during the war.

Book Sample
“I think war is a crime, if you don’t believe me, ask the infantry, ask the dead.”

About the Author:
Charles Michael McCormick grew up in Ohio, USA, and served in Vietnam in 1967-68. When he returned to the United States, he was awarded the Silver Star Medal and the Purple Heart. He then earned his B.A. in psychology and his M.A. in clinical psychology. He now lives in Oakland, California with his wife Gina.