You are here: Home / Fiction / Science Fiction / A Tale of Moral Corruption by Marsha Cornelius 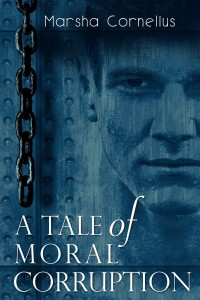 How does a man plummet into a world of male escorts, kinky sex, and death matches?

Twenty-eight year old Mason can’t wait to be a loving father and supportive husband. He’s especially looking forward to wearing the new artificial womb that so many men have strapped on their bellies. But first, he must be chosen from the Approved Partner Registry, a website that profiles men and their qualifications. It’s used by businesswomen who don’t have the time or inclination to date. When he is dropped from the registry, his life begins to unravel and it doesn’t look like anything can stop his fall from grace.

What Inspired You to Write Your Book?
I read ‘The Handmaid’s Tale’ several years ago, and the premise has stuck with me ever since. I was dismayed at how the author took women so far back into subservience. I decided I would take a giant leap forward and make women in charge of everything and put men in the second-class roles.
Was this ever fun to write!

How Did You Come up With Your Characters?
I had to tell the tale from a man’s POV because he comes in contact with several women who lead him farther and farther away from his goal. Each time he slides, his situation becomes more dire. I think this happens to women a lot because they are trying so hard to fit the mold that has been chosen for them.
The women in the story are a mixed bag of successful leaders and just plain trash.

My building is on the same block as the train station, which is good this morning because as we all ride the escalator up to street level, I can hear the rain coming down. The pace of the crowd slows at the exit, like we’re all assessing the situation, judging if we can walk without getting too wet, or if this calls for a mad dash.
Then umbrellas pop open, almost in unison, and the crowd disperses. I’d offer a dry spot under my umbrella, but all the women have their own.
I guess that’s the whole problem: women don’t need men anymore.
My grandfather says there was a time when a woman would intentionally act helpless just so a man would come to her aid; like she’d forget her umbrella, so a man would offer the use of his. It was all part of a master plan to find a husband.
In the olden days, a man wanted a female companion, ‘a pretty little thing on his arm’, my grandfather says, like he was showing off an exotic bird or rare flower.
But it’s not like that anymore.
If a woman wants a companion, she usually chooses another woman. They think alike, they see things from the same perspective, they’re on the same wave-length. Women aren’t interested in listening to men talk about themselves, and they don’t want us hanging around all the time.
I’ve heard different theories on how everything changed. My grandfather says this role reversal started once the majority of Congress was female. Grandma Lisa says that education reform is responsible. Teachers were trained to encourage girls as well as boys to excel in school. My mom insists that advertising restrictions stopped women from being viewed as sex objects and portrayed them as strong and independent.
Personally? I think women gained their greatest freedom when the artificial womb was invented.
It’s probably a little of each of these things. All I know for sure is that men once ruled the world, and now they don’t.

Buy A Tale of Moral Corruption On Amazon