You are here: Home / Fiction / Historical / A Rebel Among Us by J.D.R. Hawkins 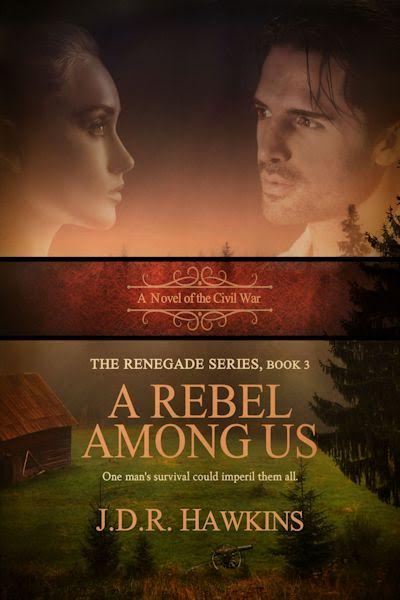 After David Summers enlists with the Confederate cavalry, his delusion of chivalry is soon crushed when he witnesses the horrors of battle. Shot by a Union picket, he winds up at a stranger’s farm. Four girls compassionately nurse him back to health. David learns his comrades have deserted him in Pennsylvania following the Battle of Gettysburg, but his dilemma becomes much worse. He falls in love with the older sister, Anna, who entices him with a proposition. To his dismay, he must make a decision. Should he stay and help Anna with her underhanded plan, or return to the army and risk capture?

What Inspired You to Write Your Book?
This is the third book in the Renegade Series. I was inspired to write the story when I first saw the Gettysburg battlefield. Because I grew up in Iowa and lived most of my life in Colorado, I had never seen a Civil War battlefield before. It was so amazing that I decided to write a book about it. One book became three, which are all part of the Renegade Series. The books revolve around a family from north Alabama, and tell the story of how the war impacts them.

How Did You Come up With Your Characters?
The main character, David Summers, is a combination of myself, my dad, and my oldest son. David is only eighteen when he enlists with the Confederate cavalry, but soon experiences the horrors of war. A Rebel Among Us takes up after the Battle of Gettysburg, when David is separated from his regiment. Abandoned in enemy territory, he is forced to find his way, with the help of Anna Brady, who is a reflection of myself and my sister.

Book Sample
“Stay back, Abigail,” Anna commanded. “You too, Claudia.”
“Who is he, Anna?” Abigail asked.
“I don’t know,” she replied. “But he’s bleeding.” Anna drew closer.
The stranger’s horse snorted threateningly, but allowed her to advance.
The interloper moaned. He opened his eyes and gazed around at them, either confused, delirious, or both. “Please,” he groaned, nearly in a whisper, “please, can y’all help me?”
The girls stood frozen, looking down at their quandary.
Anna came to her senses. “Come on, Maggie,” She kneeled down beside the young man. “Help me get him inside.”
Maggie failed to react. “I don’t think we should touch him.”
Anna glared at her, forcing Maggie to give in under her stare and pull him up. Anna reached around his other side. The soldier cried out in pain. Balancing the young man between them, they made their way out of the barn and past the sentry steed.
“Girls,” Anna called out over her shoulder, “give that horse some hay, lock him in, and bring the lantern.”
Staggering toward the house in the dark, Anna and Maggie dragged the weak man across the barnyard toward the house. Two dogs, one a black-and-white sheepdog, the other a sable collie, approached to sniff at the stranger.
“Colby,” Maggie growled in annoyance. “Floyd! Go lay down.”
The dogs scurried off into the dark.
Entering through the back door, Maggie asked, “Where are we going with him?”
“Upstairs to Father’s bedchamber,” Anna replied.
Maggie’s eyes widened, but she complied.
The sisters made their way through the kitchen and struggled to hoist the man up the long wooden flight of stairs. Abigail and Claudia ran into the kitchen and followed the others upstairs. At the top, Anna opened a bedroom door. Its hinges squeaked loudly. They led the wounded stranger over to the four-poster bed. Carefully, they eased him down, lifted his legs, and gently swung him up onto it. The young man moaned in agony.
“He’s too long for the bed,” Claudia commented.
Anna noticed his feet hung over the end. She quickly turned to light a kerosene lamp on the bedside table while Maggie pulled the windows open to let out the hot, stale air. Flickering lamplight illuminated the soldier’s condition. The front of his shirt and his right trouser leg were soaked with blood. Anna’s heart clenched.
“Oh,” Claudia said at the sight. “He’s all leaky.”
Abigail pulled her long, blonde hair back from her face and drew closer to him. “Eew!” She pinched her nose shut with her thumb and forefinger. “He smells like a horse!”
Claudia giggled at the sound of her friend’s voice.