You are here: Home / Fiction / Mystery/Suspense / A Cycle of Greed by Jill Province 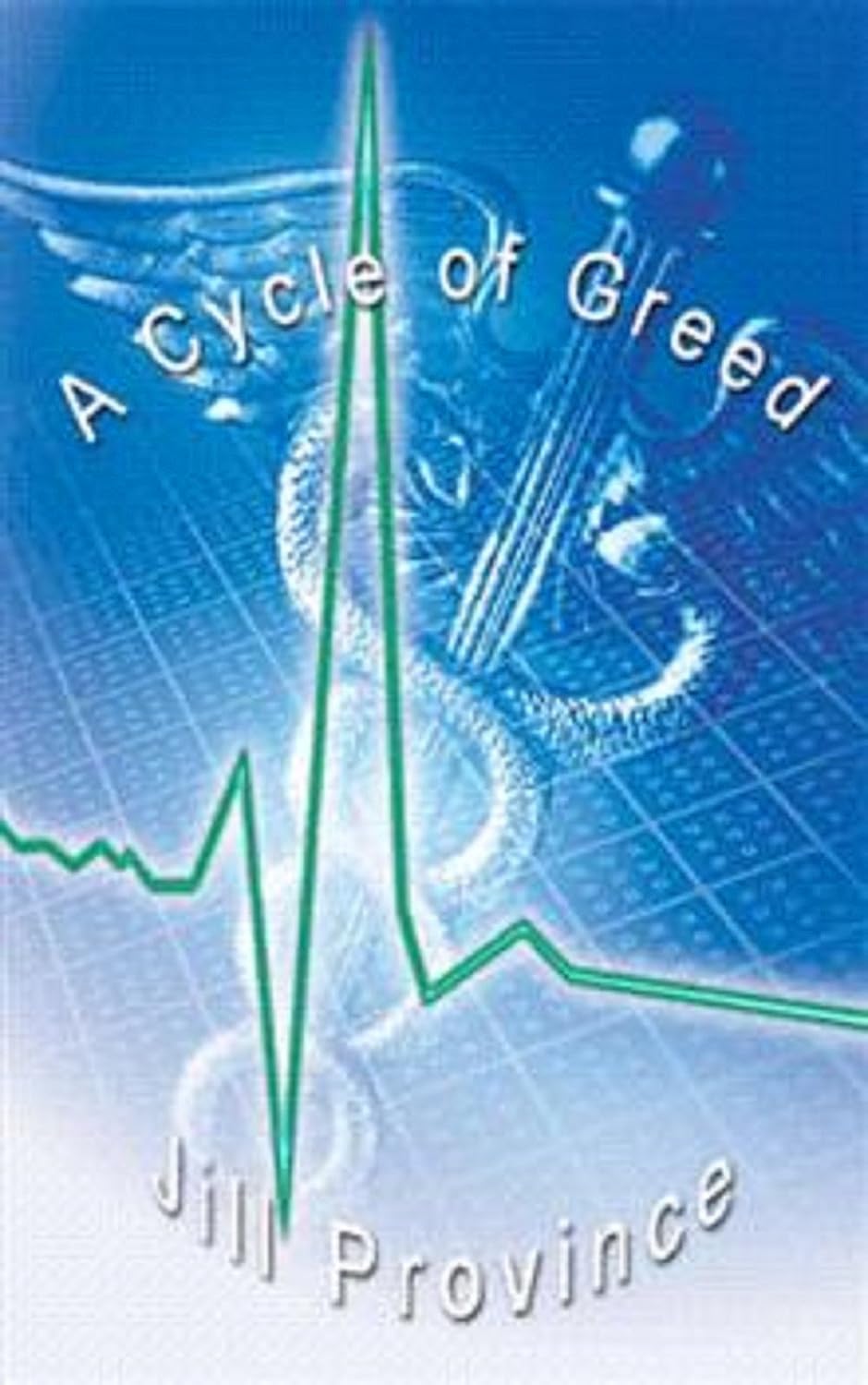 Cait Milner is a brave and vibrant woman struck down by a common and incurable illness. Her need for a lifetime of treatment triggers the loss of her insurance. Cait, while in her distorted mania, decides to fight back. The CEO of America’s largest insurance company, Medwin Insurance, becomes the target. In the ultimate irony, she decides the best revenge for an insurance giant is a taste of his own medicine.

As Cait single-handedly goes after retribution, the powers of the healthcare empire and legal community have their own agendas. Faced with a potentially damaging presidential candidate, they seek the aid of a very private, elite organization to find anything scandalous that will guarantee a win for the incumbent. They are not about to see their massive profits invaded by an over-zealous boy scout. But with their opposition so close to victory, it is a race against time.

This seemingly unrelated whirlwind of agendas comes together with astonishing clarity and shines a blinding light on the domino effect that has become a multi-billion dollar empire. Left in the hands of those who profit most, it truly is a Cycle of Greed.

What Inspired You to Write Your Book?
The cost of health care in this country has become one of this writers greatest soap box issues. It is easy and convenient to point fingers at a president or political party, however, there seems to be no focus on the real problem. The cost of care, insurance, prescriptions, etc. are criminal, and we have all sat back in a passive – coma like state, allowing this problem to drown us. A Cycle of Greed is a fictitious psychological thriller that uses an exciting story to shine a light on the domino effect that has become our worst nightmare.

How Did You Come up With Your Characters?
As a licensed professional counselor, I worked in the mental health field for many years. The characters are composites of so many of the people I was fortunate and cursed to work with.

Book Sample
Medwin was the largest medical insurance conglomerate in the United States. After buying out NationHealth, they moved on to engulf the remaining five largest insurance empires, matching a customer’s monthly premium, but only temporarily. Slowly, the premium would rise, until the cost-saving alternative became the very thing Mr. and Mrs. John Q had struggled to avoid. With the exception of a few small and very limited organizations, Medwin became the only real medical insurance available. There were hundreds of pseudo insurance companies sporting heartwarming TV ads, promising great coverage for less money. The result of a pseudo policy was a warm fuzzy feeling until it was time to use it. It was then that the policyholder would discover that they had been paying for an illusion. So, it was Medwin – bar the cost – or no coverage at all.

With Medwin Insurance firmly placed in the driver’s seat, the cost and criteria for acceptance into this elite and expensive club was rising daily. Two primary things were required of families seeking the Promised Land: good health and a large bank account. Individuals with specific health issues were sometimes accepted, designating those conditions as exclusions to coverage. Medwin employed a whole panel of people they called underwriters, whose sole purpose for living was to select individuals that would pay Medwin every month, but were least likely to ever become in need of their services.

Paying for a customer’s prior ailments was never an option. But in the recent decade, even legitimate claims were routinely denied. Enforcing payment became a game for only the most persistent. For every bold individual possessing the stamina to fight the big dog, there were hundreds that went away with their inflated bill in hand, praying that no one would take their house away in lieu of payment.

The cost for such a relationship was at an unprecedented high. A family of four in good health paid Medwin approximately one thousand dollars per month. They would also be required to pay the first five thousand dollars of all medical costs per year before their coverage would kick in.

At no other time in history had Americans paid as much for health insurance as they did for their homes. However, at some point, a house was paid for. Medwin stood to receive their premium until the subscriber died, often enforcing an increase of their premium as the insured’s health diminished.

Those unable to afford the high cost of health insurance went without, praying that they would never find themselves in need of a doctor’s services. Caitlyn Milner was one of those people.

About the Author:
Jill Province is the creator of Carol Freeman’s adventures. In all three novels, she draws on her extensive experience in the mental health field, to create exciting journeys. Born in New York, she attended the University of Miami, obtaining a bachelor’s degree in music and continued on for a master’s degree in psychology. She has focused her life on understanding the strange phenomenon of the human psyche.