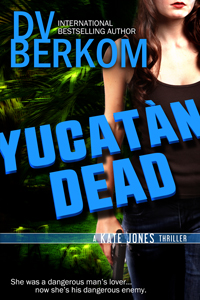 She was a dangerous man’s lover…now she’s his dangerous enemy.

For Kate Jones, being on the run from her former lover—the vicious leader of a Mexican drug cartel—was never going to be easy. But with a new identity, a new lover, and a new life in Arizona, she was beginning to believe she’d made it through the worst.

Then, in an act of twisted revenge, Kate’s kidnapped and imprisoned by her deadly enemy, his intention to force her to pay back the money she stole before he kills her.

Fate intervenes and she finds herself working against the cartels deep in the Yucatan with a group of off-the-grid commandos. From peaceful northern Arizona to the steamy jungles of Mexico, Kate Jones must decide for herself if she’ll continue to run…

…or turn and fight the evil that pursues her.

How is Writing In Your Genre Different from Others?
I love writing suspense/thrillers and action/adventure. They’re exactly the kind of books I like to read. Thriller/suspense readers expect to be on the edge of their seats and if you don’t deliver, you can lose them fast. Tension is important in all genres, but in thrillers and suspense, it’s paramount.

What Advice Would You Give Aspiring Writers?
Read. A lot. Write more. Beware of scams. Work HARD to improve your craft. Don’t let the business get you down. Connect with other writers. They’ll see you through the tough times and help you celebrate the good ones.

Author Bio:
As the author of two bestselling series featuring strong female protagonists, DV Berkom is no stranger to reading and writing fast-paced, exciting stories. Having grown up on a steady diet of spy novels, James Bond movies and mysteries, her natural inclination is to keep the reader on the edge of their seat and guessing until the last page.

Raised in the Midwest, DV earned her BA in Political Science from the University of Minnesota and promptly moved to Mexico to live on a sailboat. Several years and at least a dozen moves later, she now lives outside of Seattle, Washington with her sweetheart Mark, an ex-chef-turned-contractor, and writes whenever she gets a chance.

What Inspired You to Write Your Book?
After a recent trip to the Yucatan Peninsula in Mexico, I returned home with the kernel of a story that became Yucatan Dead. The idea had formed somewhere between the ruins of Ek’ Balam and the Riviera Maya, and wouldn’t let me go. Before I left on the trip I’d been writing what I thought was going to be a mystery with my character, Kate Jones. But Mexico changed all that.

You don’t argue with Mexico.

So, my mystery turned into a full-on thriller about the ruthless drug cartels that have destabilized so much of that country. Since I’m a novelist and basically lie for a living, I made up a group of off the grid commandos working deep in the jungle, fighting the cartels. Little did I know at the time, but groups of locals have steadily begun taking up arms against the cartels, unable to stand by and watch them turn their home into a violent wasteland ruled by ruthless predators only interested in money and power. Some of these groups have been backed by the CIA and/or the DEA, as well as the Mexican government. Some continue to operate clandestinely.