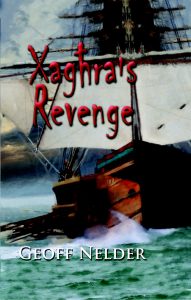 In 1551 pirates abducted the population of an entire island in the Mediterranean. Those poor folk from Gozo were taken on a fleet of galleys to be sold into slavery, harems and worse in Tripoli and Constantinople. Those 5,000 spirits need revenge and I’ve given them that in Xaghra’s Revenge. Two modern lovers discover that one of them is descended from the pirates and one from the abductees, but which one? Love, lust, angst and even humour drive the characters to an intriguing end.

What Inspired You to Write Your Book?
I discovered with shock the true fact that Gozo lost all its people on one day in 1551 to pirates. I spent years researching on the island to help those souls come to terms with revenge but also understanding of the viewpoint of the buccaneer pirates.

How Did You Come up With Your Characters?
Some of the historical characters are real, just embellished for fictional purposes. Others came to me by visiting the scenes of the action. I suppose the modern man, Reece, is partly based on myself. The women are kind of fantasy yet based on reality.

Stjepan leaned on his hoe and listened. His beans needed rescuing from the bindweed, but they’d have to wait if that was the warning bell coming from the city.
Five… He stepped up onto a low limestone wall and scanned the horizon. A flock of starlings created an air sculpture – God’s chariots chasing each other. It always lifted his heart.
Six… The Citadel topped the hill to the west; the clock tower visible, but he couldn’t see if people were running up the lanes to the city walls.
Seven, eight… He strained to see, but hills prevented a clear view of the ocean even though Gozo was less than a day’s ride across.
Nine… Perhaps a pirate ship had been seen again. The damned Turkish corsairs raided more often these days. Pirate dogs. He spat at the soil. His short sword lay under his cot at home.
Ten… In spite of the heat, he shivered at the thought of his wife and four-month-old son thrown into the dank belly of a corsair galley.
Eleven, twelve… He held his breath as if that aided hearing. The starlings swirled around the citadel as if they knew something. His heart sank.
Thirteen, fourteen… curses.
He drove his hoe into the stony soil, wishing it was Dragut’s black heart. Stjepan picked his way through berry bushes and olive trees until he reached his village, Xaghra. Karlu, his neighbour, called as he walked in the opposite direction towards the capital, Rabat.
“Ho, Stjepan, you’ll get fined again.”
“I’m not going without Lidia and my son. Your wife?”
Karlu stopped, scratched his head and twitched his moustache. “In Rabat, staying at her mother’s. She’s been coughing up hairballs.”
“That’s cats. Ah, you never liked Senora Angelina. I’ll see you there.”
In spite of the humour, panic tightened his chest as he ran across the central square. Stjepan saw his marmalade cat, its tail upright. She possessed a sense for trouble. “Heket, you’re supposed to be Lidia’s guardian.”
He frowned pushing past neighbours then saw Lidia waving at him outside the church.
“Father’s tripped on the steps. He can’t walk to Rabat.”
“He’ll have to go on the priest’s cart.”
“Already gone.”
Stjepan gnawed on a knuckle while his brain raced. He couldn’t afford another florin fine, yet the alert was probably another false alarm.
“I’ll carry your father.” Blood seeped through Alfredo’s grey robe from his knee. His eyes apologised.
Stjepan crouched before the old man. “Come on, I’ll carry you on my back.”
They crossed the wide village square. Stjepan found the old man lighter than he expected. Nevertheless, he stopped.
“What about Calypso’s Cave?”
“No.” Lidia breathed heavily carrying infant Pietru. “It’d be too obvious a hiding place. Keep going.”
He did, with increased pace until he reached the top of the steep scarp slope. The lane wriggled as it fell to the valley floor before climbing the Citadel’s slopes an hour’s walk away. They could see the exodus along the most direct route from Xaghra to Rabat.
Lidia stopped. “No.”
“What?” He followed her free arm pointing to the north. A dozen men ran along the valley floor lane. Their scimitars flashed in the midday sun, and their white turbans gave them away as Turkish corsairs. Stjepan put the old man down, then cupped his hands.
“Karlu!”
A mistake. Noise travelled far in this rock-lined valley. Karlu stood and turned to others around him, who’d also stopped. Instead of rushing on to the safety of the huge stone-walled Citadel, they walked back towards Stjepan, but it was too late. The Turks reached the escaping group. The Gozitans were overpowered in moments.
Now that route was barred, Stjepan picked up Alfredo and walked back to the deserted village.
“There might be more of them.”
“Then we’re not safe here either.” Lidia sat on a stone block.
“I know a place big enough for Pietru and your father.” No one else in the village knew about a discovery he’d made a year ago in a pile of rubble to the southwest of the village. He was digging out a well. Tingling had travelled up Stjepan’s back when he was a couple of spade lengths down. At night he began having dreams of discovering a jewelled cave. All he found was a dank, dark hole, and yet there was something special down there. He’d kept it quiet. It was Stjepan’s magic place, because he always sat with a calm, relaxed air down there. Maybe it was because he couldn’t see poverty, and in the cave he’d found a small figurine of a reclining woman–all breasts and buttocks. His elation at his private find continued that night during his lovemaking with Lidia. He’d convinced himself that Pietru was conceived as a result of magic emanating from the fertility goddess, if that was what she was. Tzabib, the mythical Spirit of old Gozo.
“So this is where you sneak off to when you’re supposed to be working,” Lidia said, after Stjepan pulled back shrubs to uncover the laddered hole.
“By keeping it a secret, none of the villagers will be able to lead the pirates to us.”