You are here: Home / Children and Young Adult Books / WYW:Part 1 by Derek Dollahite 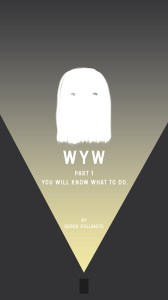 Wyatt Fox and his friend Eli live in a world where everything, from clothes and cars to weather and weapons, is connected and monitored. Today’s “Cloud” has become IOTA, or Internet Of Things Access – a system that allows for constant connectivity, smart power grids, and safer guns. On the other hand, the technology has brought widespread surveillance, greater economic disparity, and less hope for change. Wyatt, a high school student with a unique talent for programming, notices something strange on his screens after the tragic and suspicious death of his father. As the intrigue deepens, Wyatt and Eli find themselves swept up into the inner workings of an underground organization whose plan to revolutionize the world changes everything the young men thought was true.

What Inspired You to Write Your Book?
I’m interested in how people find ways to change a world that, increasingly, seems impossible to knock off course. I’m a fan of literary fiction from the likes of William Maxwell and Flannery O’Connor, great science fiction in the vein of George Orwell or Frank Herbert, and the page-turners that both a Stephen King and a Haruki Murakami are able to produce in their very different styles. WYW, a book series that I hope appeals to both young adults and old adults, was inspired by the worlds those writers (and many others) have made real through their imaginations. The near future that is described in WYW is in many ways already here, maybe so are the people who will change it for the better.

How Did You Come up With Your Characters?
Wyatt and Eli have very different personalities but at their foundation they are both teenagers with good hearts just trying to figure out how to live in the world. I think most of us, even those of us a lot older than Wyatt and Eli, are pretty similar…so creating the characters is just about paying attention to how the people around me choose to deal with the circumstances of their lives.

Book Sample
A minute later Wyatt heard the projectors firing on and saw the court flicker and the image of a long black mesh net appear down the center of the gym. Out of bounds lines sectioning off a 30×20 foot area on either side of the net faded in next. Ms. Ross came out with the box of racquets. Wyatt was slow getting to her and had to take one of the extra small, children’s racquets, the handle a ruler’s length long, head the size of a pingpong paddle.
The class stood, haphazardly, on their side of the net, arms slack and racquets pointing down toward the floor. Just then, the other team faded into existence. There were only ten of them, all in white uniforms, little pieces of text and graphics lighting up on the sleeves and chest indicating their names, numbers, and rankings in various sports. They looked across at the ragtag group of fat kids and skinny kids and Wyatt noticed in their eyes a look of undoubted superiority.
Ms. Ross said, “Well you don’t have enough players. We have triple what you have. Should we pick a team from the group?” Wyatt thought this was his chance, two out of three of them would be left with their dignity.
From the gym speakers they heard a voice – what sounded like a kid’s voice – say, “No, it’s fine. We can play this way,” and they got into a 4-3-3 formation. Wyatt’s team shuffled around, spacing themselves in either dense groups of five or ten or out alone at the corners of the court. The digital holloball appeared on Wyatt’s side near a tall, thin, dark haired girl. The girl looked around not knowing what to do. From the sideline, Ms. Ross said, “I think you need to serve it.”
The girl mimed picking up the holloball, a white glowing sphere the size of a baseball, and it moved with her hand and into the air as she threw it up. She quickly slapped at it with the racquet and Wyatt watched it miraculously fly high over the net and drift down toward the back right corner. Holloball was a little like badminton or volleyball, the physics of the digital ball made it float a little, lighter and slower than a tennis ball. A team could hit the holloball up to three times to get it back over the net. He watched as a Frasier kid glided over to the corner and batted the ball across, passing it to a kid already in midair, his elbow up and racquet snapped back in the crevice of his back, poised to obliterate the ball. Wyatt saw a white blur come across the net, landing at Renny’s feet. Renny jumped to avoid the imaginary impact, and Wyatt cringed a little at how totally awkward the kid looked.

About the Author:
Derek Dollahite studied Art History so that he could go into advertising so that he could then write stuff. In WYW, his first book series for young adults, he examines the positive and negative effects of technology and the possibilities created for social change. He lives in Austin, TX with his wife and mischievous dog.

Links to Purchase eBooks
Link To Buy WYW:Part 1 On Amazon