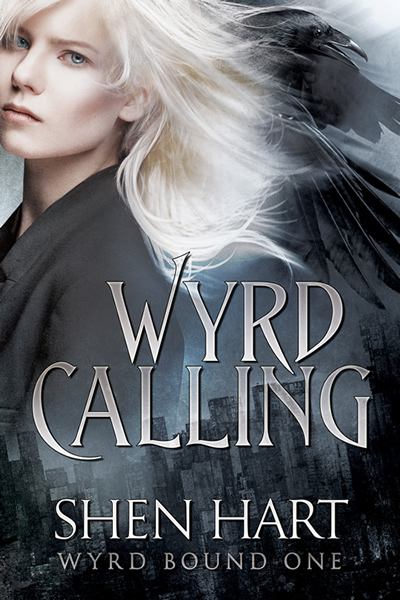 In the streets of the city, someone or something is killing sirens, and the Wyrd Sisters want it stopped.

They send their bound creation Thalia, the wild-child shifter, to track the killer down. Thalia would much rather be making a quick buck or playing with the fae, but bound is bound and Thalia must turn her new pack of shifters into an effective team to try and stop the killings. Time is as short as Thalia’s temper. Can she make her pack work together and find the killer, or will the killer find her first?

What Inspired You to Write Your Book?
I was talking to my best friend a few years back and the image of a woman, a female shifter, running entered my mind. I couldn’t shake it off, so I wrote my first ever novel. It wasn’t right, it didn’t work, so I let it sit for a few years. Then I stripped it back to its bare bones, and rewrote it as Wyrd Calling.

How Did You Come up With Your Characters?
They come to me fully formed. As I tend to write character-driven stories, they’re usually the thing that pop up first. I’ll just have a character enter my thoughts one day.

Book Sample
Things were far more complicated than we could allow them to realise. It was a delicate game and each piece needed to fulfil an exact role. Thalia was always chaotic, too aggressive, and resistant, but no one else would fill that particular role. She was ready, she didn’t know it, and she would never forgive us, but she was ready. The centuries had crawled by but everything was in its place, it was time to make our move.

I hate waiting. I knew exactly why they kept me waiting; it was a power play. They were demonstrating that this was running to their time, that they were the dominant party here. That alone got my hackles up. It was an arrogant move for them to try and make, but I wanted the money so that I could move on. I didn’t like hanging around anywhere for too long. Keep moving, don’t get caught; that was how I lived. I wasn’t running away, well I didn’t think so at that point in time. I just… I didn’t want to be trapped.

I sighed heavily and tried to remain relaxed; if I looked stressed and grumpy when they arrived, that was a point to them. I wasn’t going to give them any satisfaction. The summer night air was surprisingly dry with a refreshing whisper of a breeze. I tried to stop myself fidgeting in frustration by getting out and leaning on my car. The small car park wasn’t very well lit, but we were practically in the middle of no-where. No council was going to waste money giving light to stoners.

A vehicle finally came down the narrow country lane. Its lights dipped as it slowed and turned into the car park. Fifteen minutes late, assholes. I put a polite smile on my face, ungritted my teeth, and focused on the job at hand. It was just another transaction. Money. Freedom. A large 4×4 truck pulled up next to my old muscle car. Some part of the contrast between the large attention-seeking 4×4 and my old car made me smile. They were all about supposed respect; I just enjoyed my vehicle and wanted to get on with things. Shaking my head a little, I regained my focus and pulled the rucksack off the backseat.

Everything had to be done right. The slightest mistake on my part could lose me a lot more than just my money. As the tall man stepped out of his truck, I felt a slight shimmer in the local energies. There was a change. Something or someone else was here. It sent a shiver down my spine as I felt the trembling ripples pass. They were there and gone in the blink of an eye, but it was enough. None of us was human, that was a given. The men were some form of draconic thing. I hadn’t bothered paying much attention. They were paying good money for something I could fake. The details didn’t matter. This other being, though, it was niggling in the back of my mind. I shrugged it off and made firm eye contact with the tall man. He towered over me with his frame being almost twice as broad as my own. It took a lot more than that to intimidate me.

He stared at me, licking his lips as his two smaller partners stood either side of him. It was a little ritual, if you will. We stared at each other, not a word spoken as we waited for the other to submit. He had already pushed his luck by being so late, I wasn’t going to break and lower my eyes as well. I allowed some of my predatory side to flash through my eyes as my patience was waning. It was just enough to make his nostrils flare before he gave and lowered his eyes for a brief moment. Finally!

His voice rumbled in his throat, a deep guttural noise, “You have it?”
I smirked and took my time pulling the large glass ball out of the rucksack. It was supposed to be an ancient artifact to bring them great power and connections to dark energies. In truth, I’d bought it out of some little back-street shop and was passing some shadow energies into it. The smooth, clear glass sat slightly uncomfortably in my small hands, but it had been crafted for a larger being. The cool feeling of the shadows felt like oil slipping through my fingertips as it passed into the glass, pooling in the bottom in a faint slick before dispersing and swirling in a blue-black cloud. Each wisp had a mind of its own, but was part of the whole. I loved the shadows. It was all a neat little parlour trick.

The shadow energies would wane and fade after a couple of hours. There was no need to drain myself maintaining it any longer than that. I smiled a little as I pushed just a touch of fire energy into it, not enough to change the appearance or risk lightening the rich black of the shadows. Just enough to give some warmth to the ball – the cool glass would have given me away far too quickly. I had to keep my smile calm and self-assured without allowing the heat and spark of the fire to spread past my fingertips. Fire was my primary element, and it would soon spread through my body and energies unless I kept a very tight hold on it. The last thing I needed was to be explaining what I thought I was playing at to those guys.

His eyes sparked as they fell on the glass ball, his lips spread into a dark grin as he practically drooled. I tried not to roll my eyes. Vile creatures, no class. As he went to grab the ball, I clutched it close to my chest, pursing my lips.

With a sharp tone I said, “Money first.”

There was no reason to waste words on such a creature. He growled a little before thrusting his hand into the back pocket of his jeans. One of the scrawny men whispered something quickly. How dare an underling speak! I openly bared my teeth at him a little as I fixed my gaze on him. This was none of his business. It was not his place. Rather than backing away and showing appropriate submission, he smirked at me before his boss stepped forwards, almost pinning me against my car.

“This is a fake”
I gritted my teeth before grinning proudly and saying, “Don’t be a fool. I wouldn’t bullshit you.”

I thought about adding in his name, but I’d forgotten it. That’s what I get for dealing with so many moronic traders and lowlifes.

The blond underling had crossed his arms and was looking particularly smug. He was the cause of the ripples I’d felt earlier. It felt like a slime was settling in my lower back and trying to crawl up my spine as his boss pressed into my space. That blond, though, it was him. He was completely out of place, but I couldn’t figure who or what he was. I didn’t have the time to figure it out, either. The draconic was pushing my boundaries and looking for something to satisfy his sense of betrayal.

Somehow his voice deepened further as he said, “I don’t believe you, but I could make use of a good shifter… they sell for plenty of money, especially females.”

I snarled at him trying to restrain myself from shifting and showing any more of my animal aspects. “What makes you think I’m a shifter?”

He laughed hoarsely as he looked back to his two underlings before he leaned closer, almost speaking into my ear. I tried not to cringe when his foul breath settled on my neck as he said, “It runs all through your energies, girl.”

I snorted, saying, “You can’t tell a feral from the real thing, then…?”

He pulled back, searching my face for some idea of truth. The blond underling, he who had fucked all this for me, motioned to speak to him again. If I didn’t know better, I’d have sworn he winked at me just as his boss moved back away from me.

I didn’t care, I took my chance and dived into my vehicle. There was an odd comfort about the smooth, worn feeling of the leather under my hands as I reached across the seats. I scooted into the driver’s seat, started the engine and made my escape. Gods damn that little jackass, I swore if I ever saw him again I’d wring his neck. Now, though, I was without my money and running from some more pissed off traders. That was the last thing I wanted