You are here: Home / Fiction / Work for Hire by Margo Karasek 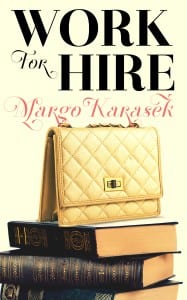 Tekla’s law school career couldn’t be any better. She has top grades. She’s on Law Review. She’s a frontrunner in a mock oral argument with a sweet prize: a judicial clerkship. One problem, though: Tekla has no more money to pay for school. She needs a part-time job. Fast.

Luckily, her roommate has just the solution: help two uber-wealthy prep school teens, the twin son and daughter of a billionaire Wall Street short-seller and a world-renowned model turned fashion photographer, with their schoolwork, and earn $150 an hour. Plus, enjoy an additional perk on the job, in the form of a gorgeous photo assistant who happens to have his eye on Tekla.

Well, not so much. Within days, Tekla’s job begins to unravel. In a world of super-wealth and high fashion, Tekla finds herself surrounded by a peculiar cast of players: two teens whose self-destructive behavior becomes ever more erratic, a father whose ambitions for his son constantly test Tekla’s notions of what is fair and ethical and what is cheating, a mother whose emotional negligence borders on abuse, and a gorgeous man who may or may not be what he appears.

As Tekla struggles to hold onto a job that takes more time and energy than she ever anticipated, her own school life begins to suffer. She makes an enemy of a professor who seems to want nothing more than to bring her down. And he’s succeeding. Soon Tekla’s life is a paradox: without her high paying part-time job, she can’t afford law school; but with it, she’ll surely flunk out of school.

Margo Karasek is a graduate of New York University, both its Law School and the College of Arts & Science, where she earned a journalism and anthropology degree, with high honors. She quit practicing law to pursue writing, and in the process also began tutoring for some of the wealthiest, best known families in New York. She currently lives in Queens, New York with her husband and their two children, and is busy working on her next novel.