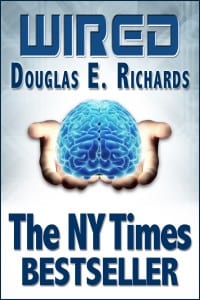 A New York Times & USA Today Bestseller, and the #1 Kindle book of 2011 in two major categories — technothrillers and science fiction.

KIRA MILLER IS A brilliant genetic engineer who discovers how to temporarily achieve savant-like capabilities in all areas of thought and creativity. But what if this transcendent level of intelligence brings with it a ruthless megalomania?

David Desh left the special forces after his team was brutally butchered in Iran. Now he has been reactivated for one last mission: find Kira Miller, the enigmatic genius behind a bioterror plot that threatens millions. But when Desh learns that the bioterror plot is just the tip of the iceberg, he is thrust into a byzantine maze of deception and intrigue, and he becomes a key player in a deadly game he can’t begin to understand. A game that is certain to have a dramatic impact on the future course of human history. . .

What Advice Would You Give Aspiring Writers?
Write what you would love to read, and don’t stop polishing until it reads like something you would be glad you purchased if it was written by someone else. The standard advice has always been, “Write what you know.” But today, when you can research anything instantly online, you have the freedom to let your writing take you wherever it takes you, learning what you need to know along the way.

In 2010, in recognition of his work, Richards was selected to be a “special guest” at San Diego Comic-Con International, along with such icons as Stan Lee, Ray Bradbury, and Rick Riordan. He has written numerous feature articles for the award-winning magazine, National Geographic KIDS — some having appeared in a dozen languages in as many as sixteen countries — as well as essays for the BBC, The Australian Broadcasting Corporation, Earth & Sky, Today’s Parent, and many others.

Richards currently lives in San Diego, California with his wife, Kelly, his children, Ryan and Regan (for whom the main characters in his PROMETHEUS PROJECT series are named), and his dogs Dash and Myla.

You can friend Richards on Facebook at Douglas E. Richards Author, and write to him at doug@san.rr.com

What Inspired You to Write Your Book?
I wrote extensively for National Geographic KIDS magazine. My editor there asked me to do a story on the brain, and I did extensive research. I found the human brain even more fascinating than I had thought I would. I never realized all it was doing, and that it could outperform the best supercomputers. The reason this isn’t intuitive to us is because the brain isn’t optimized to do things that computers can do. But for things like instant facial recognition, processing high definition images coming in through the eyes every waking moment, etc., the brain is unsurpassed. And autistic savants, who are wired differently from the rest of us, can outperform computers, even in math. So I wondered, what if you could optimize the brain to achieve savant-like capabilities in all areas of thought and creativity? The result of this question is the thriller, WIRED.