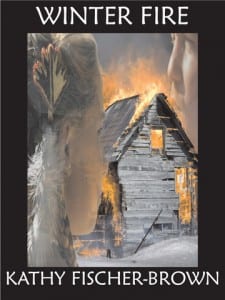 When Ethan Caine pulled the unconscious woman from the half-frozen creek, he had no idea that his world was about to explode. Dressed in quilled doeskin of Iroquois design, she stirred up dark secrets from his past. At the same time, she was everything he desired. But she was more Indian than white, and on the run for murder. He needed to know the truth. He needed to find it within himself to trust her.

Banished by the Seneca Indians who had adopted and raised her, ostracized by the whites in the settlement, Zara Grey wanted only to be accepted. “Ethancaine” treated her with kindness and concern. It was easy to trust him. But her Indian ways disturbed him, and in her heart she would always be Seneca.

How is Writing In Your Genre Different from Others?
I try to present a gritty realism that I feel is true to the era and the people who lived in it. They are not modern-thinking men and women in costume with historical events as a backdrop. The attitudes and mores of the times motivate and propel them in their thoughts and actions.

What Advice Would You Give Aspiring Writers?
Write, write, write. Then rewrite and rewrite some more. “Kill your babies.”

Author Bio:
As a child Kathy wanted to be a writer when she grew up. She also wanted to act. After receiving an MFA in Acting and playing the part of starving young artist in New York, she taught theater classes at a small college in the Mid-West before returning home to the East Coast, where over the years, she and her husband raised two kids and an assortment of dogs. During stints in advertising, children’s media publishing, and education reform in the former Soviet Unions, she wrote whenever she could. Her love of early American history has its roots in family vacations up and down the East Coast visiting old forts and battlefields and places such as Williamsburg, Mystic Sea Port, and Sturbridge Village. At the same time, she daydreamed in history classes, imagining the everyday people behind all the dates and conflicts and how they lived.

Claiming her best ideas are born of dreams, Kathy has written a number of stories over the years. Her first published novel, Winter Fire, a 1998 Golden Heart finalist in historical romance, was reissued in 2010 by Books We Love, Ltd.

When not writing, she enjoys reading, cooking, photography, playing “ball” with the dogs, and rooting on her favorite sports teams.