You are here: Home / Fiction / Winds of Change by Chimezie Ihekuna 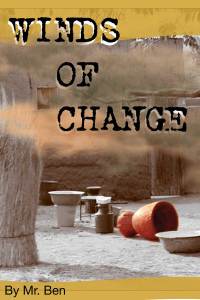 Winds of Change parades a matrix of stories, depicting the experiences of people in different countries of the world and conveying their situations as good, bad and ugly(at the discretion of the reader/viewer). Not limited to location, background and status, the airs of changes move in the direction of people in relationships, drug dealing, religion, education and professionalism; affecting them negatively or positively.

What Inspired You to Write Your Book?
My immediate environment and the world around me

How Did You Come up With Your Characters?
Imagination as unveiled as creativity via writing.

Book Sample
INTRODUCTION
Winds of Change is a written form of storytelling that applies to all individuals whose of the school of thought reads; ‘no matter how certified you are in your chosen endeavor, you are still a student of life’. Exploring life situations in a mirrored form of story writing, it goes the length to assert make-believe plights of people around the world, particularly in various continents in a way that it, not only entertains the reader but also create a platform to learn significance lessons.
From social ills to relationships, from decision to contemplation, from religious to secular interests, this book brings to the attention of readers winds of fascinating stories that reflect on each of the stated recognition. It makes known the changes in the lives of individuals.
Its purpose is to ‘close’ gap between the rich and the poor, the upper and lower class of people, the destitute and the well-taken-of and other categories of people in various ladder steps of the society. Irrespective of social, cultural, economic and political differences, Winds of Change aims at cutting across all barriers, offering readers a variety of options (stories) to center their reading energies as they interest them.
Worthy of Note: The characters, scenes and countries mentioned in this classic are borne out of the author’s creative prowess and are never intended to constitute negations to people who may be affected. Rather, as said earlier, it is intended to entertain and enable readers picture themselves in the light of the situations and more importantly, learn significant lessons from them.
‘Stories are accounts of situations and events, involving the entirety of mankind, plants and animals, living and non-existing entities, in real and fabricated or make-believe forms, which are meant to be communicated in the form of writing, oral statements, verbal expressions, signs and symbols and other known and unknown methodologies, to targeted and general audiences with the intention to entertain, create debates and discussions, mesmerize, cause tears of joy and excruciation and enlightenment.’
…Mr. Ben
Chapter One
The Love of Money

About the Author:
Paraphrasing the words of the great Greek philosopher, Socrates, ‘Employ your time by improving with other men’s writings so that you can gain easily what others labored hard for’, Mr. Ben, as he is fondly called, is poised to impact humanity in all spheres of life and human recognition. With his knowledge zenith, he is willing to disseminate valued and ageless information to all interested persons, groups and organizations-what he toiled to gain over the years.

To depict this feat, he has written over twenty breath-taking masterpieces that cut across almost very literary category to help improve the cause, shape and existence of humanity; sexuality, business anecdotes, science, home affairs, marriage, relationships, friendship, self-help, gender issues, life matters, motivational and inspirational interests, educational/academic matters and many more…He is still counting! To his credit, he has written over forty timeless articles on the various literary categories; showcased on www.ezinearticles.com, www.articlebase.com, www.searchwarp.com, www.triond.com and other affiliate sites.

No doubt, he is not only a writer with a difference but also an entrepreneur, investor and a philanthropist whose slogan reads ‘service to God and humanity are paramount’.

Link Buy to Winds of Change