You are here: Home / Fiction / Science Fiction / Why Live? by Kathy DiSanto 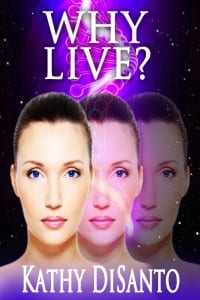 “To be, or not to be, the woman I was engineered to be?” is the question third-generation clone Kai-Lee Fox can’t help asking herself.

For more than 400 years, the star cruiser Janus has been a Utopia of sweetness and light. Life goes on and on and on for the Quingenti, five hundred souls who fled Earth when the Global Assembly refused to legalize immortality by human cloning.

Who knew six words as apparently harmless as, “There was only one Ella Fitzgerald,” could trigger a rebellion? But those words no sooner leave Kai’s mouth when the light goes on and the trouble begins. Before long the truth that rocks her world makes itself known to a handful of others, and at least one of them doesn’t have the sense to keep quiet.

When Dr. Ke-Ling Yan, the Colony’s lead geneticist and a member of the ruling Council, announces his intention to move for the abolition of cloning, the mild-mannered Quingenti reveal their dark side. How far will they go to contain the rebellion? As far as the Alpha Genesis Option. The AG microchip, implanted in every colonist’s brain at birth, is the excruciatingly painful fail-safe designed to wipe the mental hard drive and prepare it for reprogramming.

But before the mind police can make their move, Ke-Ling does the unthinkable—he commits suicide. His farewell ship-wide broadcast takes containment off the table for good, and life aboard the Janus degenerates into an interstellar witch hunt.

Will Kai-Lee and her friends survive the inquisition? Where do you run when you’re on a space ship millions of miles from nowhere, and the hounds are closing in?

How is Writing In Your Genre Different from Others?
Writing in the far future is a challenge, because I can’t use current cultural allusions to connect with my reader. No Justin Bieber song lyrics or references to current political issues, etc. You would be surprised how deeply those influences are woven into the woof and warp of our consciousness!

Instead, I have to connect via our shared human condition. I have to forge new ways to connect.

What Advice Would You Give Aspiring Writers?
Write as if you were sitting around a campfire, telling the story to your best friends. You have a unique voice. Worse thing you can do is try to sound like somebody else!

Author Bio:
Kathy’s publishing career dates back to 1997, when she published two romances with Bantam’s Loveswept line. One of them, For Love or Money, won a 1997 Romantic Times Reviewer’s Choice Award.

Thanks to her day job as a communications specialist with a major university, Kathy has written more than two hundred features for print and the web.

When not writing, she takes brisk walks with Molly and Lucy (her dogs), reads, and indulges in her latest hobby at the firing range.

What Inspired You to Write Your Book?
Thanks to science and a raft of medical advances, life is longer and better, but it’s still not forever. Some say cloning is the answer, but is true immortality possible even then?

Then I wondered, what if a third-generation clone–card-carrying member of a dystopian society where living forever is the end all and be all–started to ask these same questions?

The novel is both a thriller and an exploration of what it means to be fully human, transcendentally unique, intensely alive. It’s about the thrill of discovering your own heart and the cost of defending that heart–to the bitter end, if necessary.

Mostly, it’s about why all of that matters.