You are here: Home / Fiction / Horror / Whispers From Hell: An Anthology Of Horror & The Supernatural by Edward V’Kanty 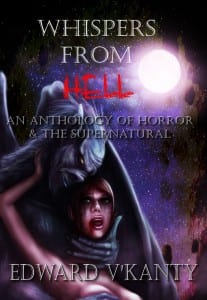 The stories included are as follows:

I. Whispers From Hell
Through a series of events beyond his own control, Melvin Andrews becomes the sole owner and resident of a house that had unnerved him from the first moment he’d laid eyes upon it. As he tries to identify the malevolent spirit haunting him, he realizes that his is not the first soul this entity has preyed upon. Can he defeat the evil that has become so obsessed with him, or will he succumb to the Whispers From Hell?

II. Kylie’s Reality
Julia Daniels comes face to face with an apparition, as she races home through a thundering evening storm, but she convinces herself the vision had been a figment of her imagination. Eager to sever the bond this lost soul has formed with her, Julia investigates the human life this spirit had once lived, if only for a brief time. A discovered diary gives her hope that she may be able to help her without having to submit to Kylie’s Reality.

III. Brette’s Discovery
A teenager, Brette Blake, goes missing and, after only a short time, she is found to be alive by this small town’s newspaper editor, John Mason. When she is finally able to speak, she reveals the discovery of a new predator that could spell doom for their small town and for the human race as a whole. Can anything stop these creatures, or will all of humanity be lost to Brette’s Discovery?

IV. A Requiem For The Damned
While on vacation with his wife, Evan reluctantly follows one of the local men deep into the jungle on a journey to find the fabled fountain of youth. Instead, the guide leads him into a village that boasts hidden beauties and contained dangers. Will he follow the royal guardian of this village and be granted access to youth eternal, or will he risk his own life and that of his wife’s to provide A Requiem For The Damned?

V. Princesses
At the moment of temptation, a crisis of faith leads one woman down a path toward her own damnation. To her own revulsion, she welcomes the pleasures these princesses bring without regard for her own salvation. At the final moment, when she has one last opportunity to save herself, will she choose the light or become a feast for the Princesses?
VI. Night Terrors
After moving into a new housing project with her two children, Lydia learns that her new neighbor and closest friend, Brenda, harbors a secret that will destroy them all. Caught in the midst of a battle between demons and displaced souls, Lydia and her neighbors must prove themselves superior or be lost within their own Night Terrors.

VII. Borrowed Time
Brent and Kristen, young and in love, are just starting to build a life together, when Kristen’s unexplained absences and the appearance of a mysterious girl force Brent to question all that he’d taken for granted. Can Brent learn more about this girl and discover why Kristen won’t leave, before it’s too late? Can he forgive, before he runs out of Borrowed Time?

VIII. Into The Realm Of The Lunatic
When her mentor and supervisor retires, Dr. Shauna Adams finds herself promoted and in charge of an experimental procedure that will allow her glimpses into the minds of her patients. As the equipment helps her to access the mind of her first patient, she becomes overwhelmed in a world where reality converges with memories, dreams, and fantasies. Lost amidst these images, she must find the truth, before she delves too deep Into The Realm Of The Lunatic.

IX. For Everything, A Season
A stranger appears to Elmira Trumble twice, pleading with her to do what is best for her children, as well as for herself, but, even after she becomes convinced of the veracity of his words, she finds that her very nature is to resist and fight. Will she continue to fight and teach her daughters to do the same, or can she accept that there is For Everything, A Season?

How is Writing In Your Genre Different from Others?
Supernatural horror is much more interesting to me in general and, as a writer, I’m not bound to the same rules of physics and laws of man as crime fiction or slasher horror.

What Advice Would You Give Aspiring Writers?
Listen to your critics only once. Hear what they have to say and, if you believe their words have merit, take their advice, but then move on. Don’t let any one critic decide your fate.

Author Bio:
I am a horror/dark fiction author with an eye towards filmmaking. While I am fairly new to the public eye, I am not new to writing and have several projects that I am currently reworking. I would describe my preferred genre(s) essentially as dark fiction, which includes fantasy and science fiction, as well as horror.

What Inspired You to Write Your Book?
These are short stories I had written in the past and I liked the idea of publishing them together in one volume, while I work on my first novel.