You are here: Home / Fiction / Romance / Where Is Papa’s Shining Star? by Judy Nickles 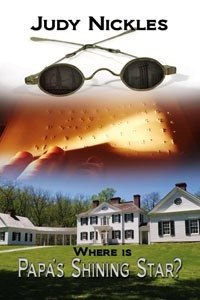 Alan Ashley has everything—physical charm, wealth, social status—when he marches off to war in 1917. It would only be a brief, interesting interlude in his perfect life. Then an exploding shell takes his sight and his hope for the future.
Returning home after two years of intensive rehabilitation of which he grudges every moment and wants only to die and be out of his misery, he confronts a fiancée who declares she can’t marry “half a man” and two cousins who intend to have him declared incompetent to take his rightful place as head of the family business.
His attorney and boyhood friend Sam Bernard calls in the big guns, former state supreme court justice Amos Sutherland, who easily restores Alan’s legacy. However it’s Judge Sutherland’s secretary, Lenore Seldon, who interests Alan. Knowledgeable and efficient, Lenore is also a self-proclaimed “Pollyanna” who sees the world as a good place and refuses to allow Alan’s cynicism to affect her. When he offers her a position with Ashley Enterprises at double her salary, she thanks him, declines, and disappears from his life.
Alan’s personal life remains stagnant, but his business flourishes even after crushing economic depression overtakes the country. He’s consigned Lenore to the past, so when she turns up to apply for the advertised job of his personal assistant, he decides to hire “Pollyanna”. Unfortunately, she’s gone, and in her place is a shabby, hungry young woman haunted by secrets she refuses to share.
He convinces her to live in, chaperoned by his housekeeper, in order to learn the Braille writer and to drive for him. He’s confused—then angry—when she disappears every weekend without no work of explanation. Determined to recapture the hope she inspired in him ten years earlier, he sets out to draw her into his solitary life of talking books and music, but he knows she’s only acquiescing in order to keep her job.
Finally able to bully her into confessing what she’s hiding, he compounds his insensitivity with further probing. She reluctantly accepts his apology and offer of help, but he understands she does so out of desperation, not trust.
Blind—but by no means without true vision—Alan confronts a voice from his past and connects the dots to Lenore. He makes the decision he knows to be the honorable one and hopes he can convince Lenore to accept it. When she doesn’t—and he realizes her very life hangs in the balance—he refuses to give up to the creeping darkness which threatens not only them but also a child placed in jeopardy by the mistakes of those she loves.

What Inspired You to Write Your Book?
The original book began as a spinoff of an old family story I’d heard by accident. I was never able to prove or disprove it through research in county records. The WWI – Depression Eras have always held a fascination for me, so it was easy to continue the story within that time frame. Though the finished product had moved away from the original family story, it retained some elements of the deception and tragically changed lives.

How Did You Come up With Your Characters?
Alan Ashley, a WW I veteran, returned home permanently blinded. With a background both personal and professional in dealing with people who have challenges, I like to use these characters in my stories as a reminder that a person with physical or mental handicaps is still a worthwhile, productive member of society.
Lenore Seldon came from my own persona–sheltered, then cast adrift to navigate a not-always-nice world. She is a survivor.

Book Sample
On Thursday night, she read aloud from the newspaper, and then they listened to the radio.
Alan leaned forward in his chair, his feet keeping time to the music. “Do you dance, Miss Seldon?”
“Oh, yes, all my friends danced at school parties.”
“I haven’t danced in years. I don’t suppose you’d indulge me?”
“There’s hardly room in here, Mr. Ashley.”
“We could turn up the radio and go into the foyer.”
“I’m not sure I remember how.”
“Neither am I, but I’d like to try, wouldn’t you?”
“Perhaps.”
He stood for a moment in the middle of the foyer to orient himself, then held out his arms and was rewarded with the feel of Lenore Seldon stepping into them. Careful not to hold her too closely, he said, “All right, on the next beat.” They moved off, not quite in time to the music.
“Is it coming back to you?” he asked.
“I think so.”
“The tempo is nice, but I believe we’re a bit behind. Shall we pick it up?” He quickened his steps as he spoke. “Are you keeping watch for obstacles?”
“Yes…oh, Mr. Ashley, the stairs!” She finished her warning as his heel met the bottom step, and he toppled, pulling her down with him into his lap.
For a long shocked moment they sat still, breathing harder than the exercise warranted. She was lighter than he’d supposed, but her hair, when he reached to touch it, was as silky as he’d imagined. Sliding his hands to her cheeks, he brought her face forward until their lips touched.
He thought she responded briefly, but, before he could speak, she jumped from his arms and ran up the stairs.