You are here: Home / Children and Young Adult Books / When She Smiled by Ritoban Chakrabarti 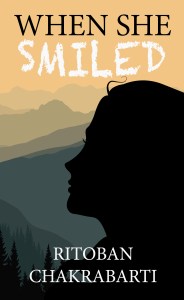 Mrityunjoy Roy is a fifteen year old Bengali who has spent the last ten years of his life growing up in Shimla, India. While his family is completely academically oriented, he wants something more. Finally he meets Akanksha in school, who turns his world upside down with her gorgeous looks and mind boggling smile. As fate would have it, she joins his tuition, and thus begins the torrid year of puppy love, romance, heartbreak, tragedy, and self discovery. Set among the scenic Shivalik hills of Shimla when mobile phones and internet were non-existent, this is a story of how an average young teenager comes to terms with his destiny.

What Inspired You to Write Your Book?
About eight months ago, I picked up JD Salinger’s ‘Catcher in the Rye’ and read it in a few hours. It was a very simple story driven around one teenage guy and how a few days changed his perception about life.
We have all had such moments. I’ve had mine for sure. There was a story that needed to be written. After reading that book, I had an epiphany.
I reflected on the choices I made as a teenager and how they influenced my future. My novel is about a fifteen year old guy who had no clue how falling in love would forever change his life. ‘She’ is the girl he falls in love with. Her name is Akanksha. The entire story is set in Shimla, which is a beautiful hill station in India.

How Did You Come up With Your Characters?
Mrityunjoy is your average high school teenager. Academically, he’s been drilled by his parents to study long and hard. Emotionally, he’s a fool. He used to be the guy bullies picked on, but then he went to an Army school, and came out stronger and more confident.
When She Smiled is Mrityunjoy’s POV story over the course of a year when he rejoins his school post the Army School experience. The book goes deep into the psyche of that teenage kid as he helplessly falls in love, experiences both utopia and confusion, makes and loses friends, and deals with his family. I believe he’s a character every guy can relate to.
Like him, most of the characters in the book were inspired by people from my real life.

Book Sample
“It was a smile that conveyed pity and gratitude at the same time.
At that moment, one thing was clear. As if all the clouds had lifted. I was sure of it.
Her smile had shown me the path I needed to take.”

About the Author:
Ritoban Chakrabarti is an entrepreneur who started his first internet marketing company right after college. Since then he has self-taught himself programming, designing, marketing, and management. His first novel, When She Smiled, a young adult romance, was first published on 30th November 2014.
He is an avid traveller, and believes in a life without boundaries.