You are here: Home / Fiction / Paranormal / When Night Falls by R’Lee R. Coffey 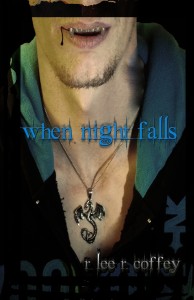 A secret is a glimpse into the past. A glimpse of something hidden… My family’s secrets are like dead corpses shoved into cupboards, abandoned to rot and stew. To be forgotten. All it took was a freak accident, the death of my best friend, to loosen the lock and let all those secrets waft out, ripe with the smell of betrayal. In order to tell a story, you have to go back to the beginning; before things get out of control, before the cupboard door breaks open. And I, Lucien Kinkaid, am going to do just that.

What Inspired You to Write Your Book?
When Night Falls started when I was sixteen years old. When the idea came to me, I didn’t really understand what to do with it so I just wrote. A lot. As the years came and went, I fixed it up, re-wrote it several times, and then finally shaped it into a readable story.

How Did You Come up With Your Characters?
I’d like to say the characters invented themselves but that would be a big, fat, lie. When Night Falls in a heavily character narrated book. The hero’s, the villain’s, the minion’s—hell, even the inconsequential secondary characters—have a voice. Making them unique and different was a challenge and a half. It was something my agent and I had to discuss in depth. I threw out tons of ideas and she told me to roll with them all. What came out was a book narrated by almost everyone. There is a brooding character, a goth characters, a southern gentleman, a French mademoiselle, and tons more.

Book Sample
Inside the house, the wolves dived in every available direction, some heading for the back, others to the second floor. Their intense snarls grew fainter as they scattered into dark corners, through hidden compartments, and out into the night.
This was going to be EPIC.
I landed on two by the door and took them out simultaneously. A couple nips at their necks and their veins were shredded. Leaving them bleeding on the porch, I skidded into the house and pounced on a small, frizzy, brown wolf. His light burned-out when I crushed his bones and organs.
My next victim was only a leap away. One of the bigger guys that had turned back into human form and then back into a wolf again. His fur was matted with sweat and dirt. Fresh blood painted his mouth from taste-testing the peeps at the Gala. My growl was really laughter, swelling up from my belly and thundering into the house. My jaw locked around his neck. Bones broke. Blood rushed across my tongue. I tore out half of his neck and tossed him across the room to bleed to death.
The small grey one that had gotten me caught scampered out in front of me. Awesome. Victim number… okay. I’d lost count. It wasn’t like I was a mathematician. I chased the runt across the moth-eaten foyer, up the slanted staircase, and around the upstairs landing.
And then she arrived.
She caught up with me beside the stairwell. When Phyr’s foot connected with my cold, black nose, I stumbled. She was on me before I was given the chance to rebound, aiming a couple of clips at my snout and one to the middle of my torso. The beast inside me longed to grab her by her braid and slam her face into the nearest wall.
My deliberation cost me. Another kick sent me sailing into the staircase railing.
It broke.
My feet groped for something to latch onto, but I was too large and out of balance to steady myself. I fell backward and collided with the black and white checkered floor two stories below.
OUCH!
My fun was officially spoiled.
A howl ripped from deep inside my throat. I had to remind myself why it was important to keep my teeth away from Phyr’s neck.
She was small.
(It would be like killing a toddler.)
She was a girl.
(With no manors.)
She was human.
(Marginally.)
Her neck would snap with the slightest pressure.
(And that was a bad thing, because…)
Phyr leapt down beside me, hauled me to my feet by my head, and kicked out again. Her heal stomped into my underbelly.
That was going to leave a bruise.
After flying across the room, I face-planted the neighboring wall, crashed through the rotted wood, and landed in tall grass beyond.
Double ouch.
This bitch needed to stop. She was really pushing my buttons.
A light sprinkle of rain dotted my fur. Gross. I hated wet fur. At least there was a breeze. My overheated body needed to cool down. Remaining still in the overgrown grass, I allowed my human body to return. My snout and arms retracted, my fur became polished skin, my eyes shrunk in, and my hair began to recede into a short, wavy bob. My angry eyes shot to the Nick-sized hole in the side of the house. I got to my feet, naked and furious.
Phyr back-flipped through the colossal gap and landed on top of me, throwing me back onto the ground. The large, sharpened, bone weapon appeared over my heart.
She looked a little riffed that the thing under her was no longer a wolf.
Good. Go me.
Pursing her lips, she glowered down at me. “You again? What are you doing here?”
Oh. I forgot. Every wolf looks the same, right? Didn’t people have the power of sight anymore? Wolves were as different as night and day. Just like humans.
“Pretty sure I’m doing the same thing you are,” I said, easily jostling her off of me. Have to admit, I felt a lot of satisfaction when I watched her head bounce off the ground. As I clamored to my feet, I turned and lifted my ear into the empty clearing. When silence greeted me, I turned back to Phyr angrily.
“Damn it! Now they’ve gotten away. What’s wrong with you? You could have been helping me get the bad guys and instead you went after me!”
She flipped forward, ignoring my state of undress, and twisted her weapon into view. Rolling my eyes, I ignored her, turned, and charged the forest. As the brisk air whipped past me, I allowed the change to take over again. My body contorted into the wolf, the animal bursting out of me with just the slightest urge.