You are here: Home / Fiction / Romance / When It Holds You by Nicki Elson 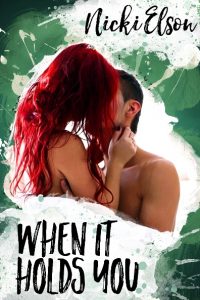 Virtual. That’s where she was supposed to stay—only in my online gaming life. I never intended to meet up with her in person. And I certainly hadn’t counted on her being who she is.

Cliff Walsh has dozens of hot, smart, and willing paramours in his video games. Who needs to look further? The twenty-eight year old attorney is done getting his heart smashed by real-life women who fit his perfect-mate checklist. From now on, he vows to keep his romances digital-only…until a certain redheaded gamer twists all his preconceptions and touches a place in his heart he didn’t know existed.

I always thought I knew what love would look like, but sometimes you don’t recognize it until the moment when it holds you. ~Cliff

When It Holds You is a stand-alone contemporary romance novel in The It Series family.

What Inspired You to Write Your Book?
At first I'd intended to tell this story from a different character's point of view, but in the stand-alone book that precedes it, WHEN IT HOOKS YOU, I fell in love with Cliff, and readers overwhelmingly responded to him, so I knew he had to take the lead in this one.

Each of the stand-alones in The It Series feature characters who give up on relationships for a while. I knew why Cliff would step away from dating, but I had to think about what he'd turn to instead. It hit me in an aha moment – video games. He'd escape into virtual reality as a replacement for real women.

How Did You Come up With Your Characters?
Cliff was a side character in WHEN IT HOOKS YOU who was only meant to be a plot device, but he became so much more. The moment he stepped "on screen" he was warm and vivacious – the kind of guy you automatically root for. By the end of writing that story, I just knew the next book had to be his love story. I'll keep mum about the heroine because she's a surprise.

Loinerd and PlanetClaire flew through the moonlit forest until they could no longer hear the yapping of the wolf-like creatures that had given them chase. The creatures had sprung out of nowhere and landed a few choice blows before Loinerd and Claire had outsmarted them and sped out of their reach. They now found themselves in a dark, secluded corner of the woods.

“Over there,” Claire said, gesturing toward the arched form of a fallen tree. The thick, bent trunk had grown over with vines and formed a sort of shelter. They were able to stand underneath the high point where the tree had cracked. “Turn around,” she ordered.

“We better hope those aren’t poisoned,” Claire said, reaching into her boot and pulling out a vial. She dabbed the contents onto her fingertips and ran her slender fingers along each of the cuts.

Loinerd flinched. “Let me look at your injuries.”

“Give me the vial.” Cliff hoped she hadn’t heard the huskiness in his voice that betrayed his sudden arousal.

Claire handed him the medicine and lifted her hands away from her sides. Cliff held his breath while he reached a virtual hand forward to push up the fabric just beneath her left breast. He stretched the hole so he could assess the extent of the damage. Reaching his other hand forward, he applied the ointment with gentle, circular strokes. During the charged silence between them, Cliff’s mind traveled to all sorts of naughty places.

“What?” Cliff was knocked off guard by her bluntness, but his avatar kept stroking.

“Lately, Loinerd’s been the go-to guy in my spank bank.”

Cliff choked on his laugh. When he heard Claire giggle, he moved his character’s ministrations to less temptingly placed wounds. Though who was he kidding—every inch of this woman’s animated body was tantalizing.

“Sorry. I didn’t realize you were so shy. Want me to change the subject?” she asked.

PlanetClaire shot a hand out to hold one side of Loinerd’s face and brought her mouth to his. Cliff clicked his controls to return the kiss and take her in his character’s arms. As he watched the avatars make out, he felt slightly stunned. His in-game sex had only ever been with non-player characters. He’d never before connected with another live human in virtual coitus.

With the two characters intimately engaged, the scene played out in autopilot. Cliff and Claire only had to make quick selections on how to proceed. At any time, either one of them could pull out from the embrace, but neither of them did. PlanetClaire moved deeper into the makeshift shelter. Tree limbs and heavy vines angled downward, providing privacy, though she had to kneel to fit under the natural ceiling. She shrugged out of her low-cut top, revealing a pert pair of breasts with dark brown nubs at their centers. Cliff longed to bite them.

Loinerd lowered to his knees and leaned in, his head swiveling as he played out Cliff’s desires. From the screen, PlanetClaire moaned. Through his headphones, Cliff heard her real-life breathing become heavier. He matched his breaths to her rhythm.

Now that they were engaged in full-on intimacy, the screen showed a montage of the characters’ nude forms from various angles, keeping the video adult-rated but not outright pornographic. Claire’s form was all pinks and peaches and browns. The only black remaining on her was a winged dragon tattoo stretching from shoulder blade to shoulder blade. Loinerd licked down the dragon’s tail trailing along her spine.

While Loinerd and PlanetClaire pumped and thrust and writhed against each other, Claire whispered to Cliff in breathy huffs, “Meet me in San Diego. At the convention. Just for one night.”

Cliff panted back, “What about keeping real life separate from gaming?” As much as the idea appealed to him, he didn’t want to make any stupid agreements in the passion of the moment.

“It won’t be real life…cosplay…with masks. We’ll be characters.”

“Oh, God, Claire,” he groaned, no longer trying to hide what he was doing to himself while he watched their characters copulate. “Let’s do it.”

Buy When It Holds You On Amazon