You are here: Home / Fiction / Action & Adventure / Whatever Gods May Be 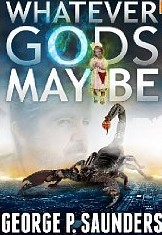 Rzzdik Zolan is a time traveler from a planet 1,000 light years from Earth. He had been assigned to Earth as an evolutionary observer, and his travels have taken him to every era of human history – from the day Christ died on the cross – to the 21st Century, where World War III strikes out of the blue.

Earth in 1 million years, A.D. is a burned out hell-hole populated by mutated bloodsuckers called Redeyes, and led by a mysterious all-powerful being known as The Resistor. Humans have reverted to prehistoric primitives, and are slowly dying out as a species.

Due to the World War, several unwitting parties, including Rizzdik Zolan, have been thrust into the future. Colonels John and Cathy Phillips, on a rare shuttle mission to the space station, are also catapulted into this decaying future, along with Thalick – an intergalactic traveler that resembles an enormous scorpion. Earth is a dying cinder, and yet one hope remains for it: the young daughter of John and Cathy Phillips – Valry Phillips – who may hold the secret to Earth’s salvation – or it’s inevitable destruction and ownership by the Resistor. It will be up to Zolan, Thalick and young Valry to do battle against the most powerful evil Earth has ever known.

George P. Saunders is the author of the celebrated and controversial international anomaly, The Art of Whoring – Adventures in Prostitution. He is also the author of Monster Vice, Gray Area, The Last Elf and Mars, The Bringer of War. His recently produced and critically acclaimed contribution to the zombie-genre film world Mutant Vampire Zombies From The Hood, starring C. Thomas Howell is now in worldwide distribution. A former Juilliard alumni and retired ballet dancer, Saunders plans on donating much of the proceeds to his books to the men and women of the combined armed forces of the United States of America. During his time as head writer for Military Films in the early 1990s, wherein he was the liaison for that company to the State Department to acquire combat footage for production, and provide narration over picture, Saunders had the opportunity to work with the U.S. Marines, U.S. Army, U.S. Navy, U.S. Air Force and with the invincible U.S. Navy Seals in Coronado, California.

Saunders spends his leisure time, when not producing, directing, writing, or acting in feature films around the world, playing chess and perfecting his martial arts, 5-Animal Kung Fu. That is, when he’s not enjoying a single-malt scotch, Glenfiddich being his favorite, in which event, he allows his mind to become his own private playground to nurture ideas for future books and screenplays. Saunders will be introducing his very first novel written at the age of 24, Whatever Gods May Be, in March of 2012, followed thereafter by Peter at the Bat, a novel revolving around an ex-Navy Seal fighting domestic terrorism.

Saunders lives in Beverly Hills, attempting to mesh in with the plastic beauty of the landscape, and failing miserably.