You are here: Home / Non-fiction / What I Wish I Knew Before I Moved to Hollywood by T.R. Locke 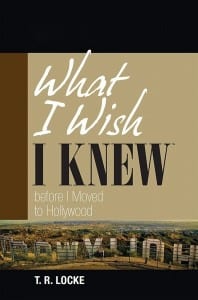 According to Oprah Winfrey, “If you follow your bliss (what makes you happy), the money will come.” Joseph Campbell and dozens of motivational speakers agree. That may be true, but what they don’t tell you is how long it may take for the money to come.

T. R. Locke abandoned dreams of being a writer and an actor in exchange for a comfortable life in suburban Chicago as a college administrator and real estate investor. Success didn’t make him happy though, it left him bored. So Locke took a chance on his old dream, wrote a screenplay and sent it to Hollywood. To his surprise, he made the semi-finals of a screenwriting contest developed by Stephen Spielberg’s Amblin Entertainment. Soon Locke was flying out to L. A., having meetings with literary agents and producers, hobnobbing with movie and music stars and anticipating an exciting future following his bliss. Two years later he was broke.

That’s when the real WORK of following his dreams began.

“Should be required reading for every performing arts program in the country.”—Book Maven Reviews

People believe Hollywood is just a world of pampered movie stars and moguls making million-dollar movies. We’ve seen the fictional life on Entourage. Every year more than 111,000 talented (and not so talented) artists move to Los Angeles to pursue dreams in movies and music. But did you know that every year about the same number leave? Why? Because on the way to the dream, most spend years as an unknown actor, writer, assistant, singer, dancer, or apprentice doing hard work that isn’t very glamorous.

Movie star Samuel L. Jackson’s first movie was in 1972—the same year Al Pacino made The Godfather. Though Pacino rocketed to fame four years after his first TV appearance in 1968, Jackson’s journey took another 22 years before he became widely known.

Confucius said, “Do work you love and you will never work another day in your life.” But he also said, “It does not matter how slowly you go, as long as you do not stop.”

“The book isn’t intended to stop people from following their bliss, but it is intended as a wake-up call… If these stories don’t scare you off, you may well have what it takes to survive and even prosper there.” –Scriptwriting Secrets

What I Wish I Knew Before I Moved to Hollywood is based not only on Locke’s own hilarious, rollercoaster experiences in Hollywood as a screenwriter and actor, but the experiences of more than a dozen other artists—from Grammy-nominated singers, to screenwriters, staffers, film and TV executives, festival-winning directors, Emmy-winning filmmakers, platinum-selling record producers and award-winning movie and TV stars. The insights they share will inspire and entertain you whether your dreams lead to Hollywood or your own Hometown.

“I LOVED this book! His insider views on the norms of the Hollywood culture are extremely helpful for those whose bliss leads them there, but the information is packaged in such an intriguing and at times hysterically funny way, that it is a pleasure to read for anyone.”—Tiffany Craig, Therapist, Amazon Review

How is Writing In Your Genre Different from Others?
The easy part of writing this book is that it is all true. The hard part is dealing with truth. The art of non-fiction is to tell the story in an entertaining and engaging way.

What Advice Would You Give Aspiring Writers?
It’s funny to be asked about advice for aspiring writers because the book is about inspiring artists–writers particularly. Much has been said about rejection and dedication to one’s art. My main advise is this: persist.

Author Bio:
T. R. Locke is a critically acclaimed bestselling author, screenwriter, humorist and former stage and commercial actor. He has ghostwritten over a dozen books. He writes an authoritative blog for artists about the entertainment business at TRLocke.com. His work has been featured on TV, in national magazines, on Yahoo and across the web. He has lectured at Northwestern University’s Graduate School of Journalism and other colleges and universities.

What Inspired You to Write Your Book?
Easy, early success led to over-confidence, cockiness and, eventually…downfall. The humbling led to insights about the work of following dreams that applies not only to artists in Hollywood, but to people everywhere.