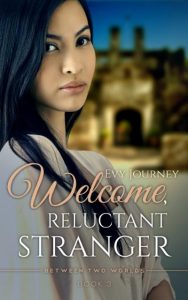 Leilani’s mother has never set foot in her school until the day she comes to whisk her children out of their country for America, without their father and without explanation. Eighteen years later, she’s a therapist in California who just wants to leave the past behind, move forward.

But everything changes one evening.

Brokenhearted after his girlfriend of seven years leaves him, all Justin wants is to drown his sorrows. But he finds more trouble than he’s looking for when thugs assault him. Leilani an ace with a gun rescues him.

Although Leilani and Justin are drawn to each other, she doesn’t want to get involved. She fears Justin is on the rebound, or has a rescuer complex.

Just as she begins to open up to Justin, Leilani’s past comes back to haunt her. A friend of her father arrives with shocking news, forcing her mother to reveal a secret she has long held about Leilani’s father.

Can Leilani deal with the truth? But hero or villain, he is her father; and only she and Justin can rescue him from the island she’d left so long ago.

In Welcome Reluctant Stranger, Book 3 of the family saga, Between Two Worlds, the many faces of love are spun into a tale of past political intrigue and a young woman’s inner journey, accepting her past.

What Inspired You to Write Your Book?
This completes the family saga, Between Two Worlds. I decided on an interracial pairing, to bring the central theme of the series (being between two worlds) further.

How Did You Come up With Your Characters?
The focus is on Justin, the second son in the Halverson family, who meets a young woman brought up in a different sociocultural milieu. There isn’t too much fiction out there that deals with multicultural issues or interracial pairing. But these are a fact of life where I live.

Book Sample
Impatiently, Justin picked up his crutch and raised himself on it. He limped toward the concrete wall and stood by it for a minute. It was low enough and wide enough to invite people to sit and watch the rocks five feet below. But not too many people ever did so.

He sat on the wall, laid the crutch on it, and swung his legs over to the edge, where they dangled toward the rocks. He faced the ocean, his back to people passing by, their footsteps and the occasional voices muffled by the sonorous duet of wind and ocean.

For some time, he watched the water lapping on the rocks, black and shiny, molded into sharp edges by centuries of salty water washing on them. They looked as if they could slice through heavy objects. What was it like hitting those rocks? Would one still feel the shock of icy waves that would wash him away after?

How easy it would be to allow himself to fall down those rocks, and let the waves sweep him out into the ocean. That would end all the pain in his body and the misery in his heart.

Misery. This was the first time in the week since the breakup that he admitted he was miserable. This morning was the first time he began to face head-on what it meant to lose Megan. While he kept busy with work, he avoided dealing with it. But now he was learning he couldn’t run away from it for too long.

Was that why he acted recklessly on Friday night? There were any number of bars or clubs where he could have gone, to drown the misery he was refusing to acknowledge. But he chose to go into a part of town that had a reputation for violence.

The men who assaulted him had been in the bar he had gone into. They had asked him if he was looking for weed, which he was sure they had assumed to be the drug of choice for people like him. When he had shaken his head, one of them had offered him something stronger, something that could make him forget and take him to heights of ecstasy he had never experienced. He had shaken his head again and they had left him alone.

Later, when he had looked around the bar, the three were nowhere to be seen. By then, he had been aware that he was drunker than he had ever been. His head swimming, he had felt like throwing up. He had left the bar, walking in the direction of the parking lot to pick up his car. Somewhere on the way, someone had hit him on the head, and events became a blur.

Justin leaned forward as far as he could go without falling. All he had to do was push himself out with his legs against the wall and he would be splayed on those rocks in less time it would take for a passerby to realize what he was doing. By the time that person screamed and ran to help him, his body would be riding the waves out to the ocean. Goodbye misery, and goodbye, Megan.