You are here: Home / Autobiographies, Biographies & Memoirs / We Never Left You by Beth and Rick Olsen 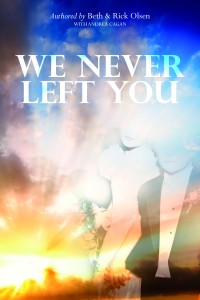 What inspired you to write your memoir?
In July of 1999 our family was involved in a car accident with a drunk driver. Our two children were killed in the accident. Within a week of the accident we knew that someday we would be writing a book. The experiences that we had in that first year after the accident helped us to understand and heal. We have been able to share those experiences over the years with people in need. The hope and healing that people received from hearing of your experiences has been overwhelming. We knew that we had to write this book in order to help more people.

About your Book:
After unspeakable tragedy, one couple must forge their own path to healing in the bittersweet true story, We Never Left You.
One moment, Beth and Rick Olsen were enjoying an ordinary life filled with all the joys and frustrations of raising their two children, Jessica and Joshua. The next moment, a drunk driver plowed through a red light at eighty miles per hour, hitting their van and changing everything.
The death of both their children launched Beth and Rick down a long and winding path toward simple survival—and eventual healing. As shock gave way to the cruel reality of their loss, they began receiving messages that proved the existence of life after death—a welcome sign that aided them in moving forward.
The Olsens soon attempted traditional healing methods but quickly found that counseling did nothing to help them get a grasp on their monumental loss. They then turned to nontraditional approaches—a decision that led them to Peru. It was there they finally began to undergo the immense physical, mental, and emotional changes that allowed them to understand everything—including the accident—happens for a reason.

How did you decide how to publish your book and where is it published through:
We worked with a ghost writer who had written several best selling books. She was in the process of changing over to self-publishing and encouraged us to do the same. We liked the control and freedom that self-publishing afforded us. We published our book through Create Space, the self-publishing arm of Amazon.

How do you see writing a Memoir as different from writing other genres of books?
This is our first published book and we have no experience with writing other genres. That being said, the biggest issue we had with writing this memoir was exposing our thoughts and feelings. We constantly struggled with what to put in and what to leave out. What would people think of this? If we didn’t put this in how will it impact the story? Even on the day we were supposed to publish the book my wife was still struggling with how people would receive the book.

Author Bio:
Beth and Rick Olsen, married since 1987, experienced unimaginable loss when their two children were killed by a drunk driver in 1999. We Never Left You is their story of healing, written to help others who have suffered tragedy. The Olsens now live in Glenbeulah, Wisconsin, with their three children.

Andrea Cagan has been writing, ghostwriting, collaborating, and editing for over twenty years. She has had more than twelve books appear on bestseller lists, including four that were number-one New York Times and LA Times bestsellers. Over the years, she has specialized in topics of social value and worked with celebrities such as Magic Johnson, Marianne Williamson, and Grace Slick