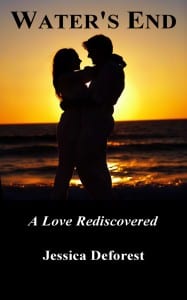 Anne Mills chooses the wrong men and loses the only man who is right for her. Thirty years later, after she has given up hope of ever finding him again, she finally reconnects with David, a man beautiful as a Roman god and elusive as a mirage. Their relationship takes her from a little town in Kansas to the inner circles of Hollywood, but she thinks he is just like all the others until she discovers the secret that makes him keep her at arm’s length.

How is Writing In Your Genre Different from Others?
Although this book is classified as romance, it’s really not the usual type of romance. To me, writing is writing, no matter what the genre, and I don’t believe in or like formulaic writing.

What Advice Would You Give Aspiring Writers?
Write, write, write. It’s a craft, and you have to keep at it to be good. Hone your grammar skills if you want to be taken seriously. And most of all, believe in yourself.

Author Bio:
Jessica Deforest is a former military wife. Even as a child, she was a prolific writer, submitting essays to a children’s page in her local newspaper, where she often won prizes such as free movie tickets or a gallon of ice cream. “My mom was a widow,” she said, “and we had a tough time financially. When I won the ice cream, it was the first time we ever had a whole gallon of ice cream in our house. That’s what planted the idea that writing could be more than just fun. It’s no wonder I ended up writing and editing for a living.”

A recipient of two Educational Press Association of America Distinguished Achievement awards for editing, Jessica says she was most influenced by studying with Sloan Wilson, author of the bestselling The Man in the Gray Flannel Suit, A Summer Place, and a dozen other novels. She has worked as an associate editor and as a staff writer/editor for several large corporations.

What Inspired You to Write Your Book?
This story is based on the life of a friend of mine. I also wanted to show how love can take many forms, and how people can change and grow if they get help through therapy or self-help groups.