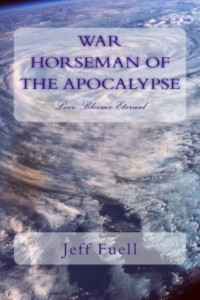 The mighty Horseman WAR has been feeling restless of late, a strange beckoning that he cannot explain seemingly calling out to him. Feeling the need to find the answer to this sensation he decides to journey to Earth in mortal form, all the while being exposed to one strange and humorous adventure after another as he tries to adjust to life as a human being. While there he experiences an overwhelming attraction to one woman. He soon finds out that she was his soul mate in a previous life… before he was chosen by God to take on the mantle of WAR, one of the Horsemen of the Apocalypse and one of the most feared and respected entities in the cosmos. Now, he must make a decision – will he continue to serve out the rest of his existence as the immortal Horseman, or will he choose to sacrifice everything in order to be with his true love once again?

What Inspired You to Write Your Book?
I had the idea as to what would happen if a deity, in this case a biblical character, fell in love with a mortal woman. What would happen? What would he do? What would he choose? My mind swirled with ideas and I created what I think is a very moving and humorous story with a surprise ending that I guarantee you that you will not see coming.

How Did You Come up With Your Characters?
WAR and the other Horseman are biblical characters. The rest of them are a product of my imagination. This book is a loose sequel to my book “Earth Angel” because one of the characters in that book makes an appearance here, as does God.