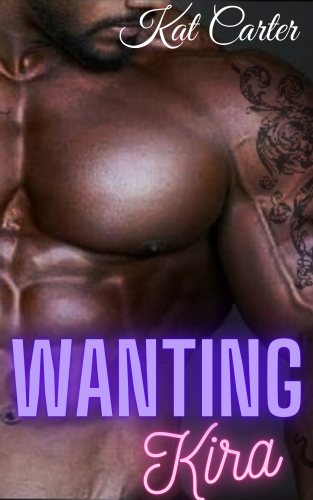 A woman on the run
Ex-Seal Steve Boden exercises control in all things; his world is neat, disciplined, and utterly empty—until the day that Kira Michaels walks into his bar, bruised, battered and terrified.

He knows she’s running from something or someone with one glance. She needs help, she needs someone she can trust, but while becoming the friend that she needs he is swept up in a storm of emotion he cannot resist.

Unlike any woman he has known before, quiet Kira seems to see right through him—past the hard as nails bar owner and the tattooed ex-SEAL to Steve’s cold, hidden heart.

Will Kira learn to trust the ex-Seal or will the dark stalker that is closing in get her first?

What Inspired You to Write Your Book?
Absolutely love writing romance stories. This story pulled at me for weeks before I put it to paper. There is something about rough sexy men with a heart of gold.

How Did You Come up With Your Characters?
I love the characters in this book. A man that is strong inside and out with a heart of gold that saves a woman that is strong but needs help finding that strength. Each character was developed as the story progressed.

Book Sample
Even though he knew he should turn her around and push her back toward the EXIT sign, he couldn’t make himself do it. There was something about her that brought out every protective instinct in him.
She was tiny and fine boned with no makeup and her hair was pulled tightly up on her head. She looked about sixteen and scared.
He ran his gaze over her face searchingly. No, that wasn’t it, not scared, she looked haunted. It was the same look he had seen on the face of more than a few soldiers when he was overseas. The look that said they had lived through hell and were still visiting. She had dark circles under weary green eyes that spoke of a lack of sleep and fine frown lines at the corner of her full pink lips.
It was that look that did it, that bleak haunting darkness that hung in her eyes, he couldn’t turn her away because of that damn look. He cursed himself for it to. Lord knew he wasn’t doing her any favors by giving her a job here.
Kira glanced at the big man in front of her, barely able to meet those penetrating eyes, it felt as if he was looking into her soul. She forced herself to move closer and sit in the chair across from him.
“What hours are you looking for?” His voice softened to a deep rumble and she folded her shaking hands in her lap.
“Anything to be honest. I'm open to work at anytime.” She couldn’t afford to be picky, “And I’m a hard worker. I don’t know about mixing drinks but I can learn.”
The corner of his mouth turned up slightly, “We don’t get a whole lot of mixing drinks around here. Mostly it’s beer, bottle or tap, or straight liquor. Think you can handle that?”
“Yes.” She moved to take off her coat and winced as a sharp pain streaked up her back. Glancing back at the man she noticed his eyes on her neck and she thought of the awful dark bruises there. Her hand moved over it to shield it without thinking even though she knew there was no hope of hiding it completely. “Accident.”
His eyes hardened as they looked at her and she knew she wasn’t fooling him with the lie but she wasn’t going to offer him the truth either. She raised her chin in defiance at the unvoiced questions in his eyes.
Steve felt his anger build as he noticed the angry purple and blue bruises that marred the lightness of her skin. They painfully encircled her neck down to her collar bone, accident hell. Those did not come from any accident, someone had hurt her. Hurting a woman was akin to hurting a child in his book completely abhorrent and unforgivable.
What bothered him was that she had looked him straight in the eye and lied to him. Two things he had no time for, liars and thieves. In all honesty though, could he blame her? He wasn’t one to talk about his personal life either, how could he hold this one against her?
“I’m Steve. Steve Boden. This lovely little hell hole is mine and I generally run it with the help of a bus boy and a waitress. Unfortunately for me, my waitress ran off with my bus boy a week ago. Fortunately for you, I haven’t found replacements.” Steve hesitated and raised an inquiring eyebrow as his eyes searched hers, “Is your ‘accident’ going to be a problem?”
Kira cringed at his emphasis on ‘accident’ as he called her on her lie, “No.”
Steve looked at her closely then leaned forward pressing his fingers together against his mouth. After a long minute of him staring her down he sighed and ran a hand through his hair.
“It’s none of my business unless it walks into this bar. I do, however, have a couple of rules. Show up on time, work your butt off, don’t bring trouble into the bar, and…” he paused looking her directly in the eye.
“And?” Kira prompted.
Steve fixed her with a hard stare frowning, “You don’t lie to me. I won’t pry into your personal life but I do expect honesty.”
She nodded, “Okay, I can do that.”