You are here: Home / Non-fiction / Walt Disney – The Inspirational Life Story of Walt Disney, A Cartoon Mouse That Started It All by Gregory Watson

Walt Disney – The Inspirational Life Story Of Walt Disney, A Cartoon Mouse That Started It All

Walt Disney is one of the most famous American icons. Known for his contributions to the entertainment and business industry, Disney is someone who followed his passion and was able to create something great out of it. He produced films, television shows, music, and built the famous Disneyland amusement parks. He won 22 Academy Awards, and 4 honorary Academy Awards during his lifetime and has the record of being given the most nominations and awards in history.

Here is a preview of what you will learn in this book:

* The up’s and down’s in Walt Disney’s Life.
* How Disney made a name for himself.
* Walt Disney’s unwavering love for art.
* The magic that bears Disney’s name, how it all began.
* Difficult times that Walt Disney had to endure.
* And much much more… 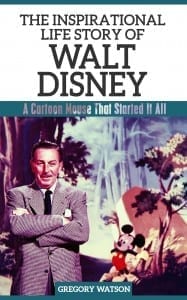 What Advice Would You Give Aspiring Writers?
don’t stop dreaming.

Author Bio:
Hello readers, please allow me to take a moment and share with you how I became an inspirational writer. During my early years when I was still in high school, reading and writing has never been a real interest of mine. My interest for reading about the success of famous people came about in the early 2000’s when the first few jobs I had after I graduated from university did not turn out as well as I had hoped. Through reading about the success of others, I also learned a great deal from all the failures that all famous people had to endure in order to get to where they are. From that I took inspiration to better myself, I worked harder and smarter every day for the following years. Thanks to that one inspiration and years of hard work, I think I can safely say that I now have a certain degree of success in my career. Seeing how one single idea turned my own life around, I started to share my story with friends and family. One thing lead to another, before long I was writing motivational self-help books that focuses on the life success stories of famous people. There are many books on the biography of these people, but what is missing are short, to the point books that place focus on how these people got there in the first place. In my books, I aim to bring to my readers inspirational stories that are easy to read, simple, and to the point. The idea is to have my readers take home something that they can live by and in doing so better their lives. I Hope you too would take inspiration to better yourself through the life stories of these famous people. Enjoy! – Gregory Watson

Website(s)
Link To Buy Walt Disney – The Inspirational Life Story of Walt Disney, A Cartoon Mouse That Started It All On Amazon