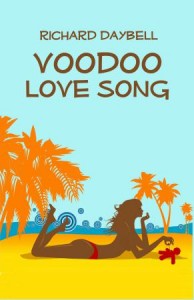 At Disney World, Paul is picked up by a five-foot duck named Huey. Duckness proves to be skin deep, however, for Huey the Duck is really Huey the Girl, an attractive young woman who leads Paul astray and to Key West, where during a sailing adventure, they are marooned on a tropical island. Idyllic, except for the pirates, pythons and panthers, voodoo, men who have passed through the earth twice, and things that go bump in the Caribbean night.

Voodoo Love Song is a tale of romance and misadventures among the living dead. It’s meant to be read while lying on a tropical beach somewhere; it should end up with sand between the pages.

What Inspired You to Write Your Book?
The Caribbean. After several vacations there, I began to write short stories using those locales. After magazine publication of several stories, I found writing a novel set in the Caribbean a natural progression. An interest in voodoo also helped.

How Did You Come up With Your Characters?
This is a difficult one. Obviously, the story is going to require certain types of characters, but beyond that . . . A short passage from my short story about the writing of a romance novel is as good an explanation as any. The narrator is growing jealous of his wife’s protagonist:
And, in Chapter Eight, he folded her into his sinewy arms and explored her flushed face with wandering lips!
“Who is Jeremy?” I finally demanded.
“He’s a character in my book,” Corey said patronizingly. “He’s nobody; he’s everybody. That’s how writers do it. He’s manufactured from little pieces of you, me, my father, Uncle Leo, the manager of the supermarket, my first boy friend Darryl.” Darryl! She’s just never been able to get over Darryl. Is it Darryl she sees when she writes about Jeremy? Of course, it is. In her fantasies, she’s Marietta and he’s Jeremy. It’s indisputable.

Book Sample
“Ah, you’re not just an ordinary duck, you’re a member of the happiness squad, here to lift my spirits.”
“No,” answered the duck. “I thought you might have a cigarette.”
“That’s an interesting deduction.”
“Well, do you?”
“Yes.”
“May I have one?” the duck asked, sitting next to him on the bench.
“Certainly. I’ve never seen a duck smoke before. Rabbits maybe, hedgehogs maybe, but never a duck. Some people might find that a bit weird.”
“I think most people would agree that what’s really weird is someone talking to a duck.”
“You could be right,” said Paul, extending a cigarette pack. “Be my guest. I’m filled with anticipation, uh . . . is it Daisy?”
“Huey,” said the duck, taking a cigarette. “Or maybe Louie. No, it’s definitely Huey. Will you take my head off, please?”
Paul reached over to take hold of the duck’s head but the duck jumped up and said: “Whoa, not now. It’s the evil chipmunk. Gotta go.”
The duck waddled off at full throttle as the chipmunk came running past Paul. The chipmunk quickly caught the duck by the back of its jacket, but the duck wheeled around and delivered a right cross to the chipmunk’s smiling face. The chipmunk fell to the ground, and the duck disappeared into the crowd. Paul stared at the ground, hoping the chipmunk would quietly go away, and that he would not be pulled into the middle of an interspecies squabble.
A few minutes passed, and the Kingdom appeared to be back to its normal happy self, when Paul felt a tapping on his shoulder, and a voice from behind said: “Quack.”