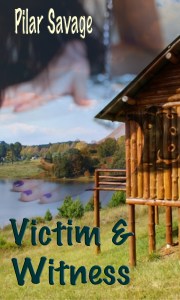 When high school student Betsy Jacobsen doesn’t come home from a trip to the local shopping mall, her parents are devastated. What could have happened to their beautiful, athletic daughter?

Bennie Escoe can’t quite believe how easy it was for him to make his fantasy come true. All he wanted was a beautiful young slave, just like the bondage pictures he spent hours perusing online. When he abducts the raven haired Betsy Jacobsen, he is well on his way to being able to enjoy a real, live version of his dream.

For Betsy Jacobsen, Bennie’s dream is her worst nightmare. She wants to escape, to return to family, friends, and home. But Bennie’s plans don’t include releasing her. Ever. Which makes escape an imperative, but how?

Captain Dan Kidder leads the local law enforcement team that is investigating the kidnapping, wondering if they are looking for a live victim, or a body.

What Inspired You to Write Your Book?
Most books begin with a “what if?” In this case, a friend who is a high school literature teacher, related a problem she had when her students were directed to do research on slavery as a follow-up to reading Uncle Tom’s Cabin. Apparently, some students did so without the benefit of content filtering, and they were a bit shocked by the amount of “slave” porn online. After I heard about this, I began thinking about the consumers of such images. So, my brain followed this path: What if one a consumer were to decide to bring his fantasy to reality. Who would be his victim? Would he just take some pictures and do away with the victim? What if he decided to keep his personal slave for a while? Would he be caught? Anyway, Victim & Witness is based on those musings.

How Did You Come up With Your Characters?
I know some people on the legal side of law enforcement, so I asked a few questions. My high school teacher friend offered insights into teenagers, too.

Elizabeth Jacobsen came out of the mall, each arm weighted with two shopping bags. She tossed her mane of dark, curly hair and relished the thought of all she had managed to procure in a couple of hours. Her birthday cash had come in handy, and she was smiling to herself as she juggled her load, trying to reach the keys in her shoulder bag. Newly eighteen, Betsy felt joy and elation. Freedom and cash, there could be no better combination! The source of much of her freedom, a white Ford Mustang, not new, but new to Betsy, was parked three slots farther along. Betsy looked down, having located the elusive keys. As she did so, a figure no taller than Betsy herself darted from between the parked cars and rapped the back of her head with an expandable aluminum baton, twenty-one inches long, made for police and security officers. Her springy, athletic steps faltered, and she crumpled to the pavement, shopping bags surrounding her like petals from a fading flower.
With a furtive glance around the parking lot, Benjamin Franklin Escoe divested his captive of her birthday haul, as well as her shoulder bag, in mere seconds. He had to move her over one row and down about three cars. Not far, but farther than it had seemed when he had parked after following her to the mall. Betsy was tall at five feet nine and was more solidly built than he had realized. Instead of lifting her in his arms, he was forced to drag her the forty or fifty feet to his own vehicle, a battered Chevy work truck. Heaving her over his shoulder, he pushed her into the cab and tucked her crumpled body into the passenger seat; fastening one cuff from a pair of police style leg irons on her ankle and snapping the other cuff onto a seat stanchion before climbing into the driver’s seat. Forcing himself to take a calming breath, Bennie looked about the parking lot. The sunlight was fading into dusk, and a security guard was continuing his sweep through the parking lot, at a snail’s pace. Bennie watched him for a few moments— the slow vehicle didn’t speed up, nor did the guard focus his attention on any one area. It would seem that the guard hadn’t seen him accost the girl, and he hadn’t spotted the bags in the next row, either. Bennie turned the key in the ignition, starting the elderly Chevy, which made a couple of banging sounds before it settled down into the muffled roar of its typical idle. Hoping to look casual, Bennie rolled down the window, hung his left arm out and backed out of the row. He guided the Chevy past a number of empty spaces and a few parked cars, then out of the lot onto the main street.
Still trying to look as much like an ordinary shopper as possible, Bennie stole a glance at his captive. She was slumped over, unconscious, but she still lived. In the dim illumination given off by the streetlights, he could see her back rising and falling as she breathed. Checking the mirrors, Bennie noted that traffic was light. He pulled up to a red light, giving him enough time to rearrange the girl’s flaccid body into a more natural position. His right hand patted the soft, dark hair of her head, which was now lying next to his thigh. A horn sounded behind him, and he jumped, then smoothly accelerated from the light, which had turned green, while he continued to stroke the glistening curls of his captive.
Betsy Jacobsen, he thought, Betsy Jacobsen. Softball star, tennis star, basketball star, homecoming queen, a dozen pictures in the yearbook — Betsy Jacobsen … mine. All mine. A thin smile crept across his dark features.

With great effort, Betsy opened her eyes and rolled her head so that she was looking up. Her head hurt, her neck hurt, even her eyeballs seemed to hurt. There was only the dim light of twilight augmented by the streetlights which seemed to be passing by, but the vibration and noise informed her that she was riding in a vehicle, and the levels of each told her that she wasn’t in her Mustang. Focusing her sore eyes, she noted the torn headliner of the truck and the driver’s face, staring at the road. Betsy flinched and brought her hand up to the back of her head— which seemed to ache more than any of her other aches. The fingers of her right hand were also smarting, and when she felt them, her fingertips were scraped raw.
“Where am I?” she muttered. Taking a deep breath, she spoke more forcefully, “Who are you?”
“Shut up.” The response was terse and hard to make out over the roar of the engine and the wind noise coming from poorly sealed windows of the truck.
Betsy struggled to right herself. Only then did she realize that her ankle was chained to the seat. A combination of fear and recollection raced through her brain. She had been at the mall, spending her birthday money, and now she was fettered to the seat of this smelly truck, being driven into the night by a man she’d never seen.
“Stay down, or I’ll have to hit you again.”
Betsy stopped in mid movement. Glancing down at the chain, she realized that she couldn’t leave the vehicle without assistance. The level of her fear climbed a notch as the menace in his voice combined with the knowledge that her headache had been caused by a blow from this man. With great care, she moved away from him, huddling into the seat as far away from him as she could get.
“Where are you taking me?” Her voice squeaked. Betsy took another long, shuddering breath, trying to regain her composure. “Why are you doing this to me?” Her effort was rewarded by a voice that was stronger, apart from the higher than usual pitch.
Her captor turned toward her, and she could see that he was not much older than she— probably not much bigger, either. She found herself wondering if she could take him. He didn’t look all that muscular, not like her boyfriend, Ryan. Having lettered in three sports, she knew that she was in very good physical condition. This guy had the upper hand, though, and she glanced down at the chain again.
“Just shut up. I won’t hurt you if you don’t make me.”
“You can’t do this…” Her voice was louder, almost a scream.
“Last chance. Shut up, or I’ll have to put you out again.”
Betsy drew in a breath for a real cheerleader yell, and her captor brandished what appeared to be dark metallic club, which glinted in the dim glow of a street lamp. Shuttering as she let out her breath, she decided to shut up. The cab of the truck was dark, and she only got an occasional glimpse of the driver when they passed under the street lamps, which illuminated the cab less and less frequently. Turning her face and attention to the road, Betsy realized that they were headed out of town, into an unfamiliar area. The driver turned again, and the roads were becoming more isolated. Fewer and fewer headlights met them, and fewer and fewer lights appeared on the sides of the road.
Knowing that she would be at an even greater disadvantage if she couldn’t find her way home when she escaped, Betsy tried to remember the route, but there were few landmarks to be seen in the dim headlights of the truck. From time to time, she turned her attention from the road to the driver, but he seemed ordinary. Brown hair, cut a bit long, a clean-shaven face, with a dark tan. He wore a black T-shirt and dark jeans. Non-descript, that was what he was. He could have been anybody. But, he was the man who had kidnapped her.
She sat up, stretching out her left foot to help her draw herself to her full height.
“You’re going to have to talk to me eventually. Who are you?” Betsy fought to keep the fear from her voice.
“I told you to shut up. We’re almost to where we’re going to spend the night. If you do what I tell you, I won’t hurt you. Okay?”
“Okay.”
“Put your head down. On your knees, or as close as you can get.”
After glancing around once more, Betsy complied.
“I’ll tell you when you can sit up. Until then, keep your head down.”
Betsy didn’t reply; she just kept her head down, but she turned sideways, trying to see out the side window. Mostly, she saw darkness.

About the Author:
Pilar Savage is of mixed heritage but thoroughly American. For fun, she travels and reads, and she enjoys a good film from time to time. Ms. Savage grew up in the Gainesville, Georgia area and still lives in the foothills of the mountains in Northern Georgia. Her novels include the science fiction adventure “Once Upon a Dirtball” and the suspenseful crime drama “Victim and Witness.”