You are here: Home / Fiction / Fantasy / Verloren by Nina Slack 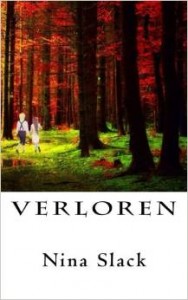 Verloren- a beautiful German word meaning lost. Imagine being lost in a fairy- tale world in the enchanting forests of Germany. Anything could happen… and does happen. Will you ever find your way out? Do you even want to? The woods captivate and inspire, haunt and frighten. So, what are you waiting for? Step inside…

1800’s Germany- The Land Of Fairy Tales. Albert and Delilah become lost in the enchanting woods of Germany. They encounter creatures and mysteries that have long existed for hundreds of years. Missing children, creatures that can talk, betrayal, realizations come to light that frighten and captivate the heart- and they must find their way out of the woods.

What Inspired You to Write Your Book?
The idea just hit me one night over a cup of tea… I have always been fascinated with Germany; the enchanting forests, the mountains, the culture, the language. And of course, everyone loves those ‘Grimm’ fairy tales. The Grimm brothers were an inspiration for me in writing this novel. I did a lot of research in German fairy tales and I let the ancient stories speak for themselves. I really enjoyed writing this novel, and I thoroughly enjoyed the research and the time and effort I put into this. It is my hope that this story is remembered as being enchanting and yet haunting…

How Did You Come up With Your Characters?
Well, it wasn’t easy… I had to research many ancient Germanic names. Let me tell you, that took some time. Let me tell you a little bit about my characters:
Albert Reisenheim (main character):
Albert- ancient Germanic of Adalbert. Adal meaning noble and bert, coming from beraht, meaning bright.
Reisenheim- German. Die Reise meaning the journey. Heim meaning home. Reisen meaning to journey.
Albert is very smart, he speaks fuent German and English, he knows every fairy tale and facts about Germany, his home land. He always tries to do the right thing, and to be brave, even when he is afraid.

Delilah Shrewsbury (main character):
Delilah- Biblical Hebrew, English meaning delicate, weak, languishing.
Shrewsbury- an English name as well as a town in Great Britian.
Delilah is young, innocent, naiive and easily gets scared. In many ways, many consider her to be delicate and weak. She depends greatly on Albert, even if she doesn’t want to admit it.

Conrad (a woodland creature):
Conrad is part of the bad creatures who reside in the woods.
Conrad is an odd creature called a Jackalope. This mythical creature is supposedly from North America. This makes things rather suspicious because Conrad is found in the forests of Germany. He is very mischievous, clever, devious and good at hiding his flaws as well as his true personality.

Adalwolf (the black wolf):
Adalwolf- ancient Germanic. Adolf meaning noble and wolf meaning wolf.
Adalwolf is part of the good beasts who help protect the forests and keep things out of them.
Adalwolf is a very brave, noble wolf. He is also pack leader, he carries his weight around, showing that he is full of pride and strength.

Athaulf (the light-colored wolf):
Athaulf- ancient Germanic. Atta meaning father and haulf, coming from wulf, means wolf.
Athaulf is part of the good beasts who help protect the forests and keep things out of them.
Athaulf is very sneaky at times. He can stealthily creep around the woods, unseen and unheard, making him a deadly predator. Although he is on the good side, he finds himself missing his old ways. He used to be a man-eater before he joined Adalwolf’s pack. When Athaulf is on the prowl with Adalwolf, and they find children, Athaulf has all he can do to not attack the children and devour them.

Book Sample
Delilah cried for quite some time; she cried until she could cry no more. She sat up, resting her back against a large tree trunk. She closed her eyes for a moment and then instantly opened them. There was an odd smell in the air that wasn’t there before. It was a musky odor, and it smelled almost wet (if wet had a smell.) It was nothing like Delilah had smelled before. It almost smelled like…
“Death…” The word came out of her mouth as a faint whisper. Delilah jumped to her feet and began to run. The smell was getting stronger, it wasn’t going away! It was almost as if…
Delilah took in a sharp breath of air and came to a halt. Something was indeed following her. And it was standing right in front of her. Her mouth gaped open and her eyes grew wide out of fear. She could not believe what she was seeing.
The creature stood at least four feet tall and was incredibly powerful. It’s broad chest and shoulders stood out from the rest of it’s body. There was thick, dark hair all over it’s body, and it was matted down in places. It’s eyes were a yellow-green, and the eyelids were hooded over those eyes, the creature’s view directly focused on Delilah. It’s lips were curled back, revealing the creature’s sharp teeth… sharp teeth that were stained pink from whatever it had just killed. And those claws…
Another creature just like this one, except a lighter color, came up and stood beside it. This creature looked just as frightening, and even more so…it had it’s sight set directly on Delilah as well. The sight of the two of them staring at her, made Delilah’s heart swell and her body frozen with fear.
“Wolves…” The word came out as another faint whisper. ‘Run! Run!’ her inner voice was screaming at her. She heard it loud and clear, but could not bring herself to move.
“Lauf! Lauf! Warum läufst du nicht?” It was the light-colored one who was speaking. Delilah could not understand what the creature was saying, but was too afraid to say anything herself.
“Ich kann dich riechen, und du riechst so gut,” said the light-colored one. He moved a few steps toward Delilah and stopped.
“I…” Delilah tried to speak, but found it more difficult than ever. “I can not understand you.” Her voice was small and weak.
“Well, we can understand you perfectly,” said the dark one. Even though his lips were uncurled and covering over his sharp teeth, Delilah still felt uneasy.
“So, tell us, what is a young girl like you doing here all alone?” The light-colored one moved another step closer to her.