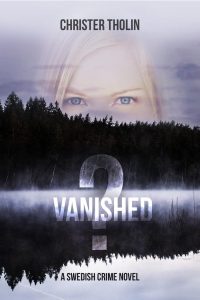 Hunt across Sweden:
To come to terms with his recent divorce, Martin, an attorney in Berlin, plans a peaceful vacation – two weeks in a Swedish summer house seem to be the solution. It won’t be peaceful, however, and those two weeks will change his life forever. He takes a liking to Liv, an attractive Swedish woman whom he meets in the neighbourhood. Unfortunately, they don’t get to have their first date – Liv disappears under mysterious circumstances. Martin begins his search but soon realises he can’t find Liv in a foreign country by himself. He hires two private investigators, Lars and Elin, and their discoveries make everything seem even stranger.
The complexities in this suspenseful criminal case lead to a hunt across Sweden. Martin comes close to finding answers, but his search lands him in very real danger, eventually leading to the first deaths. Soon he‘s wondering if he can get Liv and himself out of this situation alive.

VANISHED? is the first book in the Stockholm Sleuth Series around the private detectives Elin and Lars.
In the second book, the crime novella SECRETS?, fledgling private investigator Elin Bohlander takes on what looks like an easy assignment — at first: to determine if her client’s boyfriend is having an affair with another woman. To do this, Elin follows him to a secluded cabin in the woods, where she soon discovers that what’s actually transpiring is stranger than anyone thought. Having ventured too far, she’s stumbled upon a hornet’s nest and put her life at risk. But it’s too late. Can Elin win the unequal fight against a gang of brutal child molesters?

If you like fast-paced action and surprising twists and turns, then you will love Christer Tholin’s Swedish crime novels.

What Inspired You to Write Your Book?
Already for ages I have been a great fan of Swedish crime stories and therefore, had the desire to write my own crime story with the characters acting in Sweden. The result is my "Stockholm Sleuth Series".

How Did You Come up With Your Characters?
I created and developed the characters while writing. They somehow started living on their own. A few characteristics I had to invent, e.g. that Elin is ambitious to prove herself, but the rest somehow came out on its own.
I am currently working with the third book of the series, and I enjoy continuing with a given set of characters, they are already familiar even though they undergo a development and their life has continued.

Book Sample
They left the house and ran to the driveway. There they heard the sound of an engine rapidly approaching.
“Damn, somebody’s coming. Quick, into the woods!”
They rushed behind the house and into the trees, where before them was a narrow path. Martin tried to keep his voice muted: “We’ll cut through the woods to my car. Follow me!”
He followed the wooded pathway for a short stretch, then veered to the right through the trees. It was muddy and difficult to negotiate; that meant they weren’t going to make headway very quickly. “We have to try not to make any noise.”
Liv nodded.
They moved slowly around the house. The vehicle had now arrived; it was the black pickup.
“Shit.” Martin cursed. Liv held on firmly to his shirtsleeve. “Shouldn’t we try to escape through the woods instead?”
“Do you know your way around here?”
“No.” Liv looked around. “How far is it to my summerhouse?”
“Liv, we’re in Dalarna, really close to your husband’s summerhouse.”
“What?” Liv opened her eyes wider and pressed her hands to her mouth.
Martin looked at her: “To my car?”
She nodded.
They kept moving cautiously through the woods, able to hear the driver getting out and going up to the house. It couldn’t be much longer until he noticed that Liv’s things were missing; then he would go into the cellar and…
Gradually they put more distance behind them and approached the driveway. Martin looked back and believed they could now leave their cover without risk. It went faster on the driveway; Martin’s shoulder ached with every step, but now was the time to keep his teeth clenched. Just as he unlocked the car, he heard a sound from the house. The man had come out the door and roared something that Martin didn’t understand. Liv looked at him with horror. As fast as they could, they climbed into the car. Martin started it; unfortunately, he still had to turn it around, and there was very little space to do so. Twice he backed up until he could finally drive off. At that very moment, the engine of the pickup revved behind them. He looked in the rear-view mirror; the truck was already approaching them. He hit the gas. The car reacted and lurched forward with a jerk. Martin drove as fast as he could; Liv was frightened; she held on to the armrest and looked around from back to front.
“Faster! Please!”
“I’m trying to.”
Martin pushed the pedal harder. The main road lay in front of them – he knew he wouldn’t make the curve at that speed. Even so he kept driving at the same velocity; a brief glance revealed the pickup directly behind them. The engine was loud, and the black steel fenders in front of the hood were coming dangerously close.
At the intersection to the main road, Martin braked slightly, hoping to make it onto the dirt road without landing in the ditch. Gripping the steering wheel with all his strength, the Audi swung around, and it looked like they would make it. But the pickup had other plans. It didn’t intend to make the curve. The driver swerved slightly to the right and rammed the Audi from the side just as they reached the bend. The Audi’s rear end slung around towards the woods. Liv screamed, both airbags deployed and Martin braked with everything in his power. The car came to a stop diagonally across the road.

Before Martin recovered his seven senses, the door was swung open, and he was staring down the barrel of a rifle. The man roared something in Swedish. Martin didn’t understand a word, but it was clear, nonetheless, what the man wanted. Martin got out and raised his arms. Behind him, Liv crawled out of the car. She said something to the man, who tersely roared back, and Liv fell silent. The man wore a green parka with a high turned-up collar. Other than that he wore a baseball cap. Because of this, little of his face was visible. Dishevelled dark hair and a large, somewhat red nose. With the rifle, the man motioned them to the pickup. He opened the hatch over the bed and said something. Liv scrambled in; Martin behind her. They had to lie down, then the hatch was closed tightly.

For joining the author’s email/newsletter list you will get:
Free chapter of the second book SECRETS?