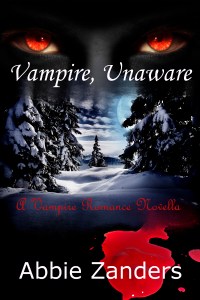 Be careful what you wish for…

Morgan Donovan wishes things were different. Unhappy with her dead-end job, tiny studio apartment, and non-existent social life, she decides to leave it all behind for the chance of a new life and a fresh start.

A near-fatal car accident along the way wasn’t part of the plan. Neither was becoming part-vampire without her knowledge or consent.

Master vampire Jason Blackthorne likes being alone. At least that’s what he wants everyone to believe. Secretly, he wishes for something to make his immortal existence worth living again.

When Morgan is brought unexpectedly into his world, he may have just found what he has been looking for.

There’s only one problem: Morgan would rather stake herself than be like him.

What Inspired You to Write Your Book?
I love a good vampire romance. There’s just something about the darkness surrounding the genre that’s appealing.

How Did You Come up With Your Characters?
I wanted to retain the creature-of-the-night mystique while making the characters familiar and relatable. Master vamp and male lead Jason had to be powerful, sexy, and brooding, but also incomplete. The female lead had to be someone capable of capturing the reluctant interest of the vamp, so I made her pure of heart, but disappointed enough in her own life to make it interesting (perfection isn’t interesting). I threw in a few secondary characters to spice it up a little bit, too – like a wholesome, likable young vamp for the buddy factor.

Book Sample
Jason Blackthorne closed his eyes and pinched the bridge of his nose with long, elegant fingers, summoning the last of his patience. Newly-turned vampires were such a pain in the ass. If only Niles hadn’t interceded on his behalf concerning that lynch mob a hundred years earlier, he wouldn’t owe the bastard a favor and be babysitting his latest turn – a young, fresh-faced, blonde-haired, brown-eyed twenty-something with the exasperating eagerness of a puppy.

Except now those soulful brown eyes were downcast and filled with shame.

Standing in the study of Jason’s private lair – a highly inaccessible, million dollar “cabin” nestled in the Cascade Mountain range in northern Oregon, the young vamp shifted his weight uncomfortably from side to side with a decidedly guilty expression. It was hard to be angry with the kid, but Jason somehow managed. Biting humans the first decade or so was extremely frowned upon; toddlers had so little restraint, and Jason had no tolerance for such blatant lack of control. One of the reasons he agreed to watch over the boy in Niles’ absence was because his lair was in such an isolated area; there was less chance of a newbie getting into trouble.

“Why?” Jason exhaled heavily, already forming a to-do list in his mind which involved either a mind-wipe or the disposal of a body, removing evidence of the attack, tracking down possible witnesses – all a total pain in the ass he really didn’t want to have to deal with.

A hesitant pause, more shuffling of feet. “She was pretty.”

Jason gaped at him, certain that he’d misheard. “Pretty.”

“Mm-hm. And she smelled awesome.”

Those fragile, thin threads of patience stretched further. “Why were you close enough to smell her? You know you are not allowed anywhere near the human settlements.”

“I wasn’t,” Brendan insisted. “I was down near the gorge, practicing my hunting, just like you said. I heard the crash, went to investigate –“

“There was an accident?”

“Um, yeah. Did I forget to mention that?”

Jason counted silently to ten. Physically, vampires were superior to humans within hours of the turning. The mental transition obviously took much longer. “Yes, you did.”

“Oh, well, there was,” Brendan said, nodding thoughtfully. Nearly six-four with all the muscles of the Big10 linebacker he’d been before the senseless drive-by that put him in Niles’ sights, he’d somehow retained his boyish charm and general aura of naivete thru the change into creature of the night.

“She must have been thrown from the car. Found her about halfway down. She was all crumpled up, bleeding pretty bad.” He averted his eyes. “Like I said, she smelled so good, and I figured with all that blood no one would notice if I took just a little.”

Just a little? Even from halfway across the room Jason could feel the raw power thrumming through the kid’s veins. Either Brendan drained the woman or she had one hell of a powerful soul. If it was the latter, it would explain why the boy was so tempted. A good spiritual essence was the equivalent of a siren’s call to those who existed in perpetual darkness.

Understandable it might be, but it didn’t change anything. There were rules for a reason. “Can she identify you?”
Suddenly the polished, hardwood beams above fascinated Brendan and commanded his complete visual attention. “I don’t think so.”

Jason stilled, his instincts screaming with an icy sense of foreboding that never ended well. “You don’t think so?”

“She moaned a little – it was kind of hot, actually – but she never opened her eyes or anything.”

She was pretty, smelled good, and when she moaned, it was hot. Thank God he’d grown out of his hormone-fueled stage centuries earlier. “She was still alive when you left her?”

“Yeah, but she didn’t look too good. Like I said, there was a lot of blood. And I think her back was broken in a couple of places.”

Damn, Jason really didn’t need this. If he wanted to be cleaning up messes he would have sired his own child. He’d always been happier alone. Even in his human life he had never once felt the urge to marry or have children, preferring his own company to anyone else’s, with only a very few notable exceptions. And of those, none had been women. He’d never met a female he could tolerate for more than a few hours, let alone years or, God forbid, centuries.

Brendan nodded. “What are we going to do when we find her?”

About the Author:
Abbie Zanders was born and raised in Northeastern Pennsylvania, USA. With degrees in Computer Science and Mathematics, she has worked for more than twenty-five years as a software engineer, designing and writing financial applications, though she has also held second jobs as a deli clerk, pub waitress, restaurant baker, and secretary. She has been crafting stories since elementary school, though she has only recently decided to start sharing them with others. She is a very busy wife, mother of three teenagers (including a set of identical twins). Besides being an avid reader and writer, she also loves animals (especially big dogs), classic muscle cars, and 80’s hair bands.