You are here: Home / Fiction / Mystery/Suspense / Unusual Suspect by Geoffrey A. Feller 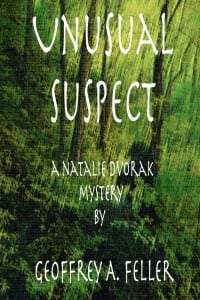 This is the third and latest in the Natalie Dvorak Mystery series. When a Sasquatch researcher turns up dead in a state park, one of his colleagues blames the legendary monster for the killing. Detective-Sergeant Natalie Dvorak of the Vermont State Police isn’t buying it but her investigation doesn’t turn up any obvious human suspect. An important witness goes missing and new signs of the Sasquatch appear even as the wife of Natalie’s boyfriend complicates the detective’s personal life. Natalie joins with the remaining bigfoot hunters on an expedition that leads to a frightening incident. Are the strange occurences the work of a mysterious beast or the plot of monstrous humans?

How is Writing In Your Genre Different from Others?
Two immediate distinctions are the period setting and the ongoing personal life for my heroine. I set the mysteries in the early 1980s so that forensic evidence doesn’t involve DNA or other high-tech devices used these days. There is a reliance instead on conversation, whether witness interviews or suspect interrogation (I prefer The Closer to CSI), which reflects my interest in relationships, the overriding theme for all my books. The messy romantic life of my heroine carries on through the series even as the individual mysteries are solved in each installment.

What Advice Would You Give Aspiring Writers?
While networking is important, the basic act of writing and producing material is fundamental. Be curious about people around you and use your observations to add depth to your stories and the characters who populate them.

Author Bio:
The author of six novels and the Natalie Dvorak Mystery series, Geoffrey A. Feller was born in the early 1960s in the Bible Belt but grew up in a Massachusetts college town. A somewhat restless adulthood has led to several homes over the years from Albuquerque to Berlin, although he has mostly alternated between Massachusetts and Minnesota. He has worked a variety of office jobs but has also acted in plays and performed improvisational comedy. He enjoys spicy food and currently lives in metro Minneapolis with his wife and their miniature dachshund.

What Inspired You to Write Your Book?
I have long had an interest in Sasquatch stories and the search for the legendary creature. My rational mindset doesn’t allow me to really believe they exist but I would love to be proven wrong. Many years ago, I thought it would have been interesting if not fun to go along on a bigfoot seeking expedition and then write a book about it. When I heard that Sasquatch sightings were reported in the same part of Vermont where I set my police detective series, this plot immediately suggested itself.