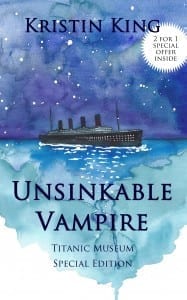 Haunted by the recent loss of her father and the family estate, Charlotte Covington boards the greatest ocean liner in the whorl only to discover her mother intent on matchmaking. It is not the young wealthy bachelor who sets her heart aflutter. Rather, it is the intriguing after-hours doctor who attends her ailing mother. A date with destiny, however, will reveal the doctor’s true nature and leave Charlotte with only one hope to survive tragedy.

Author Bio:
Kristin King first saw a vampire in a coffee table book of Hollywood monsters and has been hooked on paranormal creatures ever since. Inspired by her husband, adored by her golden lab, accepted by Jesus, and well grounded by her four sons, Kristin can be found on Facebook (KristinKingAuthor), twitter, and pinterest where she especially enjoys hearing from readers.

What Inspired You to Write Your Book?
I’ve been fascinated by the Titanic tragedy since I was a child. When people starting gearing up for the 100th anniversary, I was working on my vampire series which had a side character named Doc. So I started playing with idea that Doc had been on the Titanic moving to new facilities in the US when it sank. I set aside my novel and ran with the Titanic story as quickly as I could to get the ebook out for the April anniversary. The paperback came later.

It’s been a sort of dream come true that the Titanic Museums & Attractions in Branson, MO and Pigeon Forge, TN now carry my book on their gift shop shelves. A good friend of mine, Kellee Wynne Conrad, did original artwork for that new edition.