You are here: Home / Bargains and Freebies / Bargain Books Under $3 / Unsavory: An Indigenous Horror Short Story by Cathy Smith 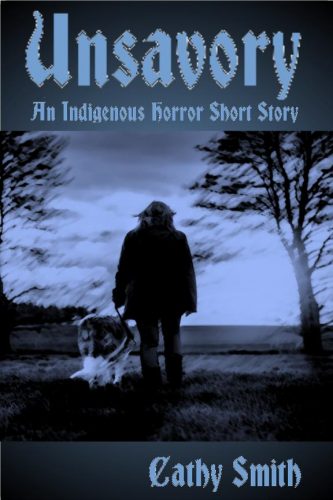 Doreen is in danger of becoming one of the Missing and Murdered Indigenous Women and Girls. Can her loyal guard dog, Gertrude, protect her from a creepy neighbor who only comes out at night?

What Inspired You to Write Your Book?
I always wanted to write about a dog who bites a vampire.

How Did You Come up With Your Characters?
I wanted to write a "dog bites vampire" story. I ended up making them Indigenous when I came across an a recent open call.

Book Sample
Doreen Van Every came from the Rez and no place felt like a home without a dog. She wished she could’ve afforded a bigger yard for her pet dog Gertrude. However, she got Gertrude before she got the house in a suburb off the Rez and had to make do with what she could afford.
Gertrude was mostly a German Shepherd. Doreen considered her a full Rez dog despite her blood quantum. Rez dogs were the tough mutts on the Indian reservation she lived on. Some people got purebreds as pets but most of her people preferred sturdy mutts.
Another carryover from Rez life was the fact she trusted Gertrude more than house alarms. She figured such an attitude was traditional to her people. They’d always prefer their canine protectors to burglar alarms. Gertrude proved her worth when Doreen’s neighbor came over.
She saw Gertrude’s barking as both an alarm and a doorbell. That’s why she went to the door as soon as she heard the barking.
Doreen jumped when she saw a man peer into the door’s window…