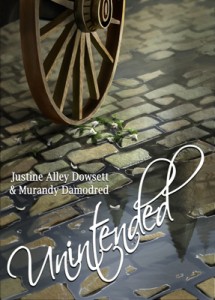 Everything happens for a reason…

Meet Kenzie en Shareed, the High Clan Chief’s daughter who is sent south to fulfill a treaty by marriage only to marry the wrong man; Kadrean Authier, the Crown Prince who must come to terms with his new bride, even if he doesn’t much like the idea; Garron D’Arbonne, a noble Lord who has been commanded to marry a cool and aloof princess he doesn’t love; and Vivianne Chappelle, a young and ambitious woman who is in love with her abusive father’s manservant and must find a way to avoid having her entire future decided for her.

Fate and wills collide in this Shakespearian-style romantic comedy about good intentions and their unintentional consequences.

What Inspired You to Write Your Book?
Shakespearian comedies, The Princess Bride, Game of Thrones and Outlander.
I wanted to write a book that combined light and dark elements of fantasy with comedy and romance. Unintended has four plot lines that intertwine for the sake of comedy and dramatic irony.

How Did You Come up With Your Characters?
Originally I ran a role-playing game called 10 Nations where each player was asked to invent a nation and then send that nation’s ambassador to form a ruling council. A number of the characters were inspired by this game, as was the setting.

I hope all is well with you and that you are not overly upset with me after last night. I feel I must apologize for my actions during your birthday dinner. They were uncalled for and not at all ladylike. I also know that I wasn’t supposed to kiss you without your permission. I will never do it again, I promise.

I would like to wish you a belated ‘happy birthday’ and make up for the fact that I never got the chance to give you your gift. While thinking of what to get you I discovered the dilemma of ‘what do you get the Prince who has everything’, so I decided to make you something no one else possesses.

Kadrean read the letter through a second time before he let it fall to the table, turning his attention to the package that had been delivered with it. He had to admit, to himself at least, that he was overcome with curiosity.

What do you get the Prince who has everything? He repeated Kenzie’s words in his mind. I wonder what you thought up. Surely, a gift from you would be original.

Kadrean tore open the packaging, removing the plain ribbon that bound it. Within the thick paper was high quality black fabric. He pulled it out to get a better look at it, discovering that she had hand-stitched him a waistcoat and not only that, but the front of it was covered in very fine embroidery in red and gold thread.

This isn’t some amateur attempt either, he realized, having an eye for such things, this is quality work. With this level of detail she must have started it soon after arriving here, unless she had help to make it, but even still…

He held the garment up to himself and was both surprised and impressed to note that the width of the shoulders was perfect. So she either has a good eye or she knew how to get the information from the servants without it being remarked upon…

The more Kadrean examined his gift the more impressed he was with it and the woman who had made it for him. All of a sudden he remembered the letter she’d sent with the package. It’s very possible that Kenzie en Shareed is cleverer than I originally gave her credit for.

He quickly re-read the letter. ‘I know I wasn’t supposed to kiss you without your permission. I’ll never do it again, I promise.’

“She wants me to want her to kiss me.” In his surprise, he spoke the words aloud without meaning to. “She won’t kiss me again unless I am the one to initiate it. She’s issuing me a challenge…I don’t know what’s worse, that she’s bold enough to do it, or that I’m seriously considering her words enough to accept…”