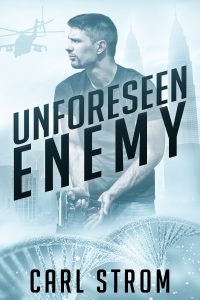 The stakes are always high for Jack Shaw, a sniper and intelligence operative for the Global Intelligence Agency. But now, following the death of his partner during a botched GIA mission, the stakes have never been more personal. Jack missed his target the first time. Was the mistake purely human, or is he losing his grip?

Now he’ll get the chance to find out. Paired with the far younger operative Yi Ling, Jack embarks on a deadly follow-up mission to track down the Romanian criminal that evaded his crosshairs.

But when their target is revealed to be merely the tip of the iceberg in a much more sinister scheme, they must confront an even greater evil—a corrupt sociopath named Wong. This twisted mastermind controls what he claims to be the holy grail of human genetic engineering.

In a manhunt spanning the globe, Jack and Yi face the riskiest test of their careers as the murders multiply and trusted friends become sworn enemies. Against the cinematic backdrop of Singapore, Jack and Yi barrel toward an epic showdown with Wong that will determine whether his homicidal technology is unleashed on a massive scale that could alter the course of human history.

What Inspired You to Write Your Book?
Jack teams up with young operative Yi Ling on a globe-spanning mission to seek redemption. But when their search for justice collides with a twisted mastermind who controls the holy grail of human genetic engineering, they’re in a race to stop this sociopath’s homicidal technology before it’s unleashed on a history-altering scale. My fascination with genetics inspired me to write this story. Human genetic engineering will have the potential to cause great harm in the future; I created a sort of 'worst case scenario.'

How Did You Come up With Your Characters?
I wanted to make the main character, Jack, relatable and human. In the story, Jack suffers from PTSD and the story is as much about him overcoming his demons and personal issues, as it is about defeating the more obvious enemy: Wong. Wong is a corrupt sociopath, and I find the link between genetics and personality very interesting. The characters' unique traits highlight the book's core theme, I think. I strive to make all of my characters seem real instead of paper-thin, cardboard cut-outs. I think that, as a society, we have barely scratched the surface when it comes to understanding individuals' uniqueness, and what it means to be human.

Book Sample
He would soon pack it in: the sniper rifle, the assignment,
his career. The smell of roofing tar filled Jack’s
nostrils as he lowered his head and lay down flat on his
stomach. Rainwater seeped through his clothing and his
headache intensified. It was far too late to back out.
Nestling the bipod into the roof gutter, Jack
double-checked his right knee. It was at a perfect ninety-
degree angle. He hardly ever checked his leg. Why
now? However abnormal, given what had happened, it
was a wise precaution.
He fixed the butt of the sniper rifle firmly in the
pocket of his shoulder through the gentle pull of his
fingers, then closed his eyes. He tried to meditate on
the din of Bucharest traffic seven floors below. His final
engagement with the world before he shut the door on
all distractions.
He gripped the small of the stock behind the trigger;
his skin tingled as it pressed against the cold cheek
piece. His brain resisted the usual coaxing and painted
a picture of him knocking the rifle over the edge of the