You are here: Home / Children and Young Adult Books / Under My Skin by Zoe Markham 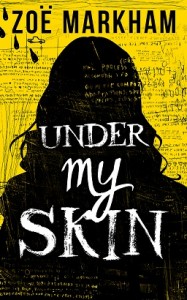 Chloe was once a normal girl. Until the night of the car crash that nearly claimed her life. Now Chloe’s mother is dead, her father is a shell of the man he used to be and the secrets that had so carefully kept their family together are falling apart.

A new start is all Chloe and her father can hope for, but when you think you’re no longer human how can you ever start pretending?

What Inspired You to Write Your Book?
As a big fan of Mary Shelley’s Frankenstein I wanted to write a contemporary reimagining for today’s Young Adult readers.

How Did You Come up With Your Characters?
Chloe has been in my head for years, growing up with me even though I didn’t realise it. She’s a type of ‘everyman’ figure who I think will resonate with many teenage girls.

Book Sample
You know that split second when you wake up and the line between your nightmares and reality is blurred? The darkness and the icy burst of fear in my stomach tell me it’s a dream; but the damp, decaying smell and the unfamiliar sound that I can’t quite put my finger on feel horribly real. I don’t move, and I try not to make a sound. I even hold my breath, and just listen. There’s a faint beeping noise close by, only it’s distorted somehow and I can’t focus on it. As I’m trying, I notice something else behind it, a harsh sort of rasping, rising and falling in the background. The more I try to isolate the sounds, the harder they get to hold on to. Maybe if I just lie still, and try not to panic, I’ll slip into a different part of my dream; a nicer part, one involving Tom Hiddleston reading to me in bed or… only I don’t know because I can’t lie still, I’m starting to shiver with the cold. The beeping sound is changing – it’s getting louder and faster now; uneven, frantic almost. I shiver harder, and then the rasping stops and the beeping switches down to just one, low, continuous tone and it’s panic one, Chloe nil. I shoot bolt upright in what doesn’t feel anything like my bed, and force my eyes open, except… I don’t. They don’t. I don’t move. My brain’s screaming: Up, UP! Get up! But nothing happens. I can’t move.
It’s the worst kind of nightmare, the kind where you’re trapped inside your own head, only I don’t think any nightmare could feel this real, for this long. I should’ve woken up screaming by now. And someone should be here: Mum, turning the light on, telling me it’s all right; or Dad, shouting What’s all the noise about. Only there’s no one.
And then the beeping stops, and I think maybe it’s over.
In the sudden, brief silence that follows I hear Dad’s voice after all, and he is shouting, and the relief is almost as intense as the panic was, but it’s hard to make out what he’s saying. I don’t know if it’s Chlo, or No, and then after a few seconds of him saying it over and over I’m not even sure it’s really him at all. I don’t know what to feel any more, until light explodes around me, light a million miles away from the warm yellow glow of my bedside lamp, and I get my answer: Pain. I feel pain. It’s everywhere, all at once, and I don’t know where I end and it begins. I don’t know how I’m going to feel anything but pain ever again. The light’s coming from inside me, ripping me into a thousand burning pieces and I don’t know who or what I am any more, only that I don’t want to be.
My mind must have been the last thing to shatter. A tiny of piece of it comes back with the same, steady beeping. The voice is there too – closer, clearer this time: a voice as torn and as broken as what used to be me. It’s Dad, but it’s not Dad.
‘I can’t do this,’ it says. ‘I can’t do this on my own.’