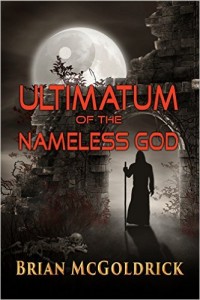 About Ultimatum of the Nameless God:
Taereun: Battleground of the Damned was never really a game. It was a testing ground to find minds and souls for the The Nameless God to use, and for tens of thousands of players, the game became reality, when they were put in the bodies of their characters. The Nameless God told them that he would return them to their real lives, if they fought through the Labyrinth of Yggr and freed his body from beneath the city of Haven. After searching for over 11 years, they found the Gate leading to Haven.

After being murdered right before the gate to Haven was opened, Mark McGuinness wakes up in a hospital in his original body. As a child, he was in an automobile accident. A freak whose body rejects most medical treatments, he was left scarred and disfigured. Angry, bitter and disgusted with the world, he had used Taereun: Battleground of the Damned to take out his frustration and anger, so he would not lose control and hurt or kill someone in real life. The closest he had ever come to being happy was living as Talon, during the eleven year search for Haven.

Having learned about the Power called ki, Mark McGuinness discovers that his human body is capable of channeling and using it. Once again armed with Power, he finds a way to travel from Earth to Taereun. He has questions he wants answered and people he owes. Whether mortal or divine, he will let no one and nothing stand in his way.

WARNING: For Mature Audiences Only. This story contains rather graphic descriptions of violence, gore, sex and sexual violence.

Link To Buy Ultimatum of the Nameless God On Amazon