You are here: Home / Fiction / Twisted by Lola Smirnova 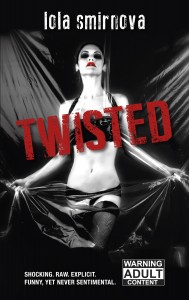 Lola Smirnova recently released her debut novel Twisted. Smirnova is an author from Ukraine living in South Africa, who for many years worked in the sex industry. Twisted is a true life shaped into fiction story of vulnerability, courage and the art of making a living in the sex trade.

Twisted is a disturbing behind-the-scenes look at a world that most will never see. It is shocking, raw, and explicit.

In the corrupt economy of post-Soviet Ukraine opportunities are scarce. Young and eager sisters – Natalia, Lena and Julia – harbor dreams of a better life. Naïve and tempted by the allure of ‘quick’ money, the girls set off on an adventure that changes their lives forever.

Can they stay out of trouble enough to fulfill their ambitions? Can they hold on to their idealism in a world where depravity and danger are constant companions? How far are they willing to go to make a buck?

“Twisted is a nightmare journey into the life of Julia, a young woman from Ukraine who, struggling for a future, follows her sister’s path into the sex trade. In the post-Soviet break-up world, there is little to offer in the way of traditional jobs. Skilled doctors in the state hospitals earn a couple hundred a month, but a woman working in a cabaret, strip club, or as a call girl in one of the nearby countries can earn several thousand. All she needs to succeed is what she was born with and the ability to skillfully size up a client’s needs and perform to his expectations, while trying to stay out of prison. Yet, Julia quickly learns the money comes with a price in violence, degradation, and addiction… The characters are real, dialog intoxicating, and the plot well crafted.” – Reviewed by Gary Stout at Readers’ Favorite

What Inspired You to Write Your Book?
Besides the fact that I wanted to sell millions of copies and become wealthy rich? 😉

I had a story to tell that maybe could help to change peoples’ often ignorant attitude towards problems of the sex industry, victims of which usually are young inexperienced women. I wanted the reader to realize that those working girls are humans… They dream, love or suffer the same way as anyone’s girlfriend, sister or daughter.

How Did You Come up With Your Characters?
The main character is Julia. She is the youngest of three sisters. She is a risk taker and careless enough to get in all sorts of troubles, her elder sisters try to teach her to avoid. But no matter how tough it gets, she is not a complaining type… That’s what I love about Julia the most.

The heavy motorcycle helmet is so tightly strapped to my head that I can hear the blood rushing through my ears. The smell of stale sweat reeks from the worn padding inside it. I struggle to swallow. A drop of spit runs down the ball gag that has been shoved into my mouth, then down my chin, and drips onto the couch beneath my knees. My shoulders are screaming from the pull of the handcuffs, which force my hands together behind my back.

He stands in the middle of the small and gloomy room and I can see the outline of his large body. Two bloodshot eyes are firmly fixed on my exposed nipples. A fleshy tongue slides backwards and forwards through the gap in his teeth. He licks the sweat off his lips, moans, and starts rubbing his groin, rocking his wide hips back and forth. He increases the pace, while his moans get louder and louder. Next, he stops abruptly, moving his eyes from my chest to my face, scowls, and takes a few menacing steps towards me. I shrink instinctively, tensing my body …

‘I know him. Don’t be scared Jul. He’s a bit strange, but a harmless motherfucker.’ That is what my sister, Natalia, managed to whisper in my ear half an hour ago, before I followed this freak, with the brain bucket in his hand, upstairs.

Natalia and I were sitting at the bar counter when he walked in. He didn’t even have a drink; just stepped in the door, looked around, stopped his stare at me, and mumbled, ‘I want you. Let’s go.’

‘It’s time to work!’ teased Natalia. Her naughty look followed us all the way up the stairs.

‘Sag es!’ the crack-head screams again, which I think means ‘say it’ in Luxembourgish or German.

He grunts, and with a wild thrust shoves his hips right into my face. He doesn’t even bother to take his jeans off. A quick unzip and he pulls out a flaccid penis, puts one foot up on the couch and starts violently pumping it, so close that his clenched palm is punching the helmet. Lucky for me the visor is shut.

I sigh deeply and try to shift on the couch to get rid of the cramps, which start crawling up my legs and back.

A bit strange? Come on, Natalia! You could call him anything – cracked, insane, alien on Earth – but hardly ‘a bit strange’!

I glance at the half-empty bottle of champagne seductively chilling in the ice bucket. If I’d known what Natalia had meant by ‘a bit strange’, I would have finished it before he handcuffed me and shoved the damn ball into my jaws.
‘Sag es!’ brings me out of my thoughts again.

According to the instructions he gave me before we started this session, I was supposed to say ‘I love you, I forgive you’ through the gag.

I wonder what my seventh-grade teacher would say if she walked in the door right now? She always believed in me and encouraged: ‘You are going to come out on top, Julia …’ Good shot, Anna Ivanovna. You were pretty close!

He shuts his eyes and wrinkles his forehead in concentration. Frustrated, he drops his limp penis and squats next to the small table in the centre of the room. He pauses only to wipe the trickle of sweat from his forehead. Then he quickly snorts the line of blow on the glass table, and doesn’t get up for a while, staring deadpan at the wall.

Hey, fat boy, get on with it so we can have some together after this. I think I deserve a little pick-me-up for my efforts here.

I wonder what could possibly have happened to turn his grey matter inside out like this. A few hours later, when I kick my ‘labour hour’ around with the girls, they will tell me some rumours about him having had a motorbike accident. Apparently, he was riding ‘under the influence’ with his fiancée in tow. She died there on the street, in his arms, in a puddle of mud. With the last beats of her heart, he stared at her wide-open eyes, full of terror, and at her bleeding lips that breathed in agony: ‘Please, baby, I don’t want to die.’

I shudder. I don’t know if he was injured in the accident, but after this short time we’ve spent together I can assure you that his brain was nowhere to be found after that crash.

He finally comes back to the couch, pulling and beating his poor half-dead cock in front of my plastic shield. I try to say what he demands – anything to get this over and done with, and me out of here – but ‘I love you’, that forms beautifully in my throat, dissolves into an incoherent mumble as it hits the ball.

His small eyes devour every inch of my naked body, which is truly just skin and bone with boyish nipples where there are supposed to be breasts. The only reason why any man would choose to fuck me (aside from being a paedophile, of course) would be my big blue eyes and long blonde hair.

His whole face is scrunched up in an ugly leer and his bottom lip is quivering as he makes a weird whining noise.

Oh please! Don’t tell me you are going to cry now! Pathetic, sick, even disturbing, but not just ‘a bit strange’, Natalia?!

He keeps on yanking and jerking and thrusting like a maniac – harder and harder. He’s going to pull that thing off if he doesn’t stop!

‘Sag es! Sag es!’ he whines over and over, then forcefully flips the visor up and pulls the bottom of the helmet so close that his soft crotch hits my face. I shut my eyes a second before the first squirt of semen hits them.

‘It’s over’ slips with warmth and ease into my head, then streams down through my body, echoing the semen on my face. My eyes are closed but I can still hear him sobbing, sniffling and mumbling.

I can’t believe this fucker just ruined my make-up!

All I’ve got from this pathetic episode is an experience I will never be able to share with my grandchildren and €60 with no promise of a tip.

About the Author:
Smirnova is an author from Ukraine living in South Africa, who for many years worked in the sex industry. Twisted is her debut novel, which was published in January 2014. Smirnova is currently working on her second book – a sequel to Twisted. To learn more, go to http://lolasmirnova.com/

Links to Purchase eBooks
Link To Buy Twisted On Amazon